Princess Mako, who turned 29 on Oct. 23, and Princess Kako, her younger sister, stroll on the grounds of the Akasaka Estate in Tokyo on Oct. 6. (Provided by the Imperial Household Agency) 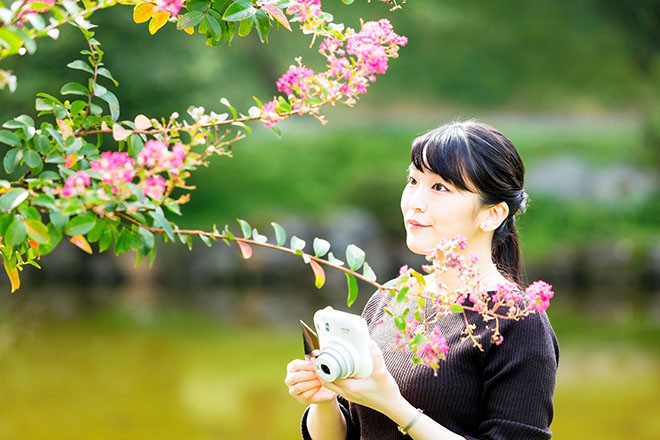 Princess Mako gazes at flowers on a crape myrtle on the grounds of the Akasaka Estate in Tokyo on Oct. 6. (Provided by the Imperial Household Agency)

Princess Mako, who turned 29 on Oct. 23, has managed to stay engaged with the public despite restrictions on her activities due to the COVID-19 pandemic by taking to the internet, according to the Imperial Household Agency.

The princess frequently goes online to talk with experts and carry out other official duties along with her parents, Crown Prince Fumihito and Crown Princess Kiko, and her younger sister, Princess Kako, the agency said.

Mako has held 31 online sessions with experts from various fields and front-line workers to be briefed on their opinions and activities since last October.

From spring, when novel coronavirus infections began surging in Japan, she also started listening to how health care workers were battling the pandemic and what measures they were taking against the virus.

In May, Mako and her family personally made medical gowns with agency staff and donated them for use at hospitals after learning that the gear was in short supply during one of the families’ online chats with medical personnel.

Mako is also busy performing her role as president or honorary president of organizations.

In September, she visited an exhibition as part of her activities as president of the Japan Kogei Association, which promotes Japan’s cultural heritage and traditional crafts.

She also talked with officials of the Japan Tennis Association, where she serves as honorary president, to ask about the association’s current situation and schedules for championships.

The princess watched Naomi Osaka win matches in the U.S. Open to claim the championship tennis title in September. She was reportedly impressed by the Japanese superstar, who wore face masks bearing the names of Black victims of police brutality to draw public attention to the deep-rooted problem in American society.

A close aide to Mako said she will sooner or later express in public her thoughts on her marriage to Kei Komuro, which was postponed until 2020 after financial issues involving Komuro’s family came to light.