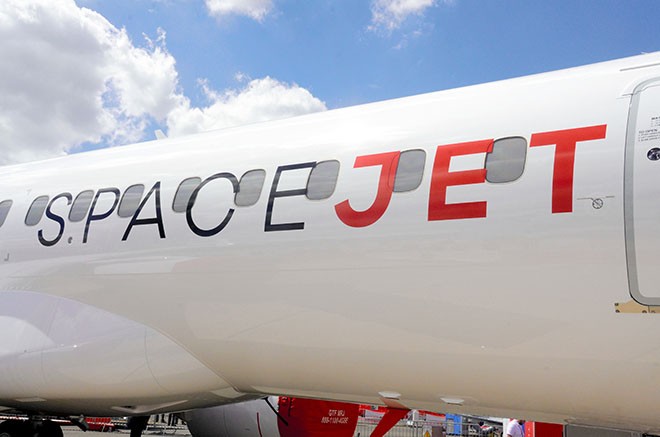 Mitsubishi Heavy Industries Ltd.’s plan to roll out the nation’s first commercial jet is falling further in doubt, as the company expects to curtail spending on development after having already slashed the project’s costs.

The company will spell out the additional cuts to the troubled project in its midterm business plan, which will be released on Oct. 30.

Mitsubishi Heavy had planned to deliver the aircraft, the SpaceJet, to its clients as early as fiscal 2021.

Although the company said it will continue development, it now appears extremely difficult for the project to come to fruition.

While the company acknowledged on Oct. 23 that it is reviewing the schedule for the SpaceJet project in light of the coronavirus pandemic, it denied reports that it might freeze the project.

“It is true that we are weighing every possible option with respect to the project, but there is no such fact that we have frozen the development,” the company said in a statement released the same day.

Mitsubishi Heavy had already cut the project’s development costs for the current fiscal year down to 60 billion yen ($566 million), half the figure allocated for fiscal 2019.

In addition, it has scaled back development tests and sales offensives to pitch the aircraft.

Mitsubishi Aircraft Corp., its subsidiary tasked with developing the aircraft, is expected to shed nearly half of roughly 1,600 employees on the project.

Mitsubishi Heavy has three development centers for the project in the United States and Canada, but it has already decided to close two of them.

Still, it will continue with the procedures to obtain a type certificate for the aircraft, which confirms that it is in legal compliance with airworthiness requirements.

The airplane was previously known as the Mitsubishi Regional Jet, coming in two types: one seating 90 passengers and the other 70.

Mitsubishi Heavy gave the green light to the jet project in 2008. But delivery of the aircraft has been postponed repeatedly since then, due to a design change.