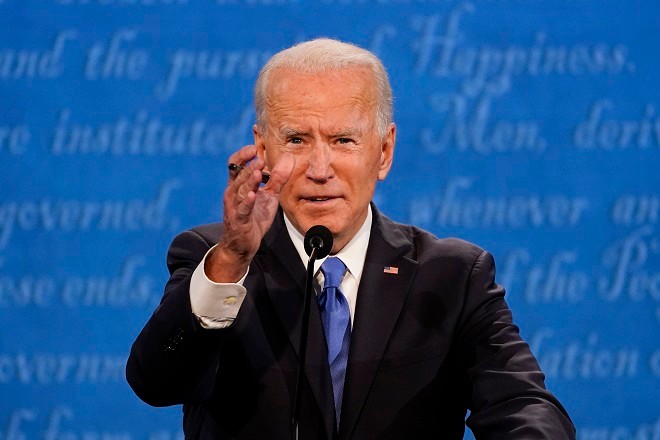 The originality of her very unique visual style, achieved by photographing hand-made clay figurines that are placed in intricately designed settings, took my breath away when I came across her book for the first time.

I watched the final U.S. presidential debate, hoping to get some idea of how this election season will end.

Observing the face of former Vice President Joe Biden, I was reminded of the encyclopedic array of facial expressions presented in Baek's seminal works--"Amedama" (Hard candy) and "Okashina Okyakusama" (The strange visitor).

Every time President Donald Trump provoked him, Biden shook his head in disapproval or raised his eyes heavenward with his mouth open.

Their previous one-on-one debate in September, which devolved into a shouting match, was deemed "the worst presidential debate in history."

But this time, Biden refused to react in kind, and resorted instead to expressing his strong feelings with his eyes, eyebrows and cheeks, which he must have practiced thoroughly.

Trump countered with vertical movements of his eyebrows, but he failed miserably to pull it off.

I interviewed Biden about 20 years ago, when I was stationed in the United States. He was 56, a fifth-term senator and a veritable foreign policy czar. I still vividly remember his ambitious eyes. He fielded questions with great aplomb and cut a dashing figure as he left the interview.

He has spent 36 years in the Senate, and served eight years as President Barack Obama's vice president. But he is prone to making gaffes, which has always been a cause for concern: He once got Iran and Iraq mixed up, and referred to British Prime Minister Theresa May as Mrs. (Margaret) Thatcher.

However, there seems to be no doubt that Biden, now 77, has acquired the maturity of a seasoned politician of his age. Less than a dozen days remain until Election Day. But given how wrong the U.S. media's prediction of the outcome turned out to be four years ago, nobody should be jumping to conclusions yet.

However, my impression is that Biden has just about put Trump in check by refusing to engage in a verbal brawl and winning the "facial expression battle" at the debate.