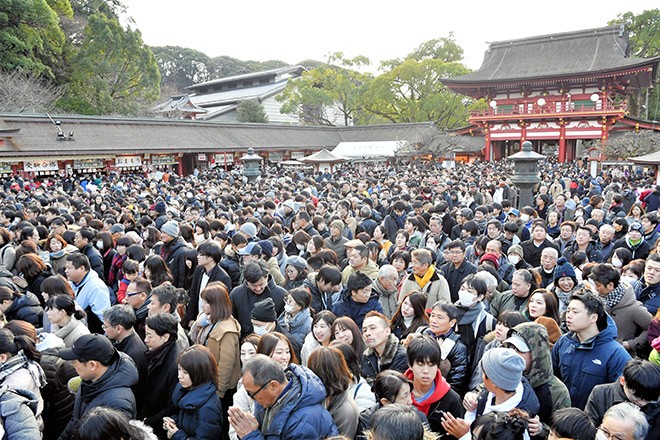 The nation's legions of factory and office workers will be asked not to take year-end through New Year holidays en masse to avoid the traditional annual crush at temples, shrines and on public transportation so as to lessen the risk of a spike in novel coronavirus infections.

The central government on Oct. 23 decided to request major business organizations to show flexibility and extend the holiday period to allow employees to take breaks until Coming-of-Age Day on Jan. 11.

Japan during the New Year holiday season is a time when millions of people flock to their hometowns and visit shrines and temples to make wishes for the coming year.

But infectious disease experts at the day’s meeting of the government’s panel handling the COVID-19 crisis called for a drastic change to the ritual next year as a move to safeguard people's health.

Yasutoshi Nishimura, the economic revitalization minister who is also in charge of the government’s handling of the pandemic, told reporters after the meeting that public employees as well as members of Keidanren (Japan Federation of Economic Organizations), the nation's largest business group, and other leading business groups will be asked to cooperate.

Traditionally, most companies close for the first three days of the year. With Jan. 4, 2021, falling on a Monday, many businesses are expected to reopen then, cutting short the holiday period.

Health experts expressed concern that such a tight schedule would create a jam-packed situation at many sites nationwide and increase the risk of the virus spreading.

The government will also urge people to refrain from partying on Halloween, not to drink too much on streets and in restaurants and stay away from costume party venues that lack sufficient anti-virus measures such as adequate ventilation.

(This article was written by Ayako Nakada, Naoyuki Himeno and Tomohiro Yamamoto.)