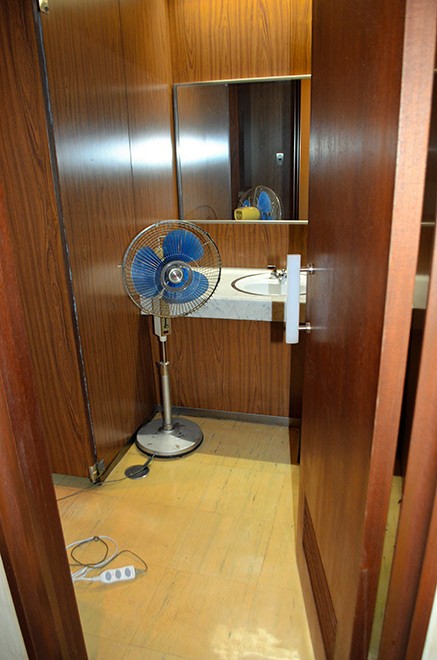 A small room pictured Oct. 23 where the mayor of Ikeda set up a home sauna in the Ikeda city government office in Osaka Prefecture (Kazuhide Setoguchi)

IKEDA, Osaka Prefecture--A mayor who used to play American football and now suffers from a painful lumber disc hernia was forced to apologize after an online site ran a story about him setting up a sauna in his office for treatment.

Hiroki Tomita, the 44-year-old mayor of Ikeda city in Osaka Prefecture, apologized at an Oct. 23 news conference for “creating a misunderstanding that I mixed public and private matters.”

He added that he was reflecting on his actions.

The “scandal” broke Oct. 22 on the online news site Daily Shincho, which alleged the mayor set up a makeshift home sauna in a small room near his waiting room on the third floor of the city government office in mid-September.

He uses the sauna every three days or so, according to the article that raised some serious allegations.

Usually during a lunch break, it said Tomita changed into training wear, used the sauna for about 20 minutes, wiped himself dry and changed back into a suit.

Tomita said at the news conference that he used the sauna “as part of my rehabilitation from lumber disc hernia and other issues.”

He said he removed the sauna in mid-October after his wife told him that local residents would not approve of such behavior.

Tomita pledged to calculate the amount of electricity he used and pay back the money that was spent.

He also admitted that he temporarily set up a tatami bed in the mayor’s waiting room and installed an exercise bike in a hallway, but said he had already removed them.

Tomita said he played American football in high school and at university, which led to a lumber disc hernia and other issues.

After working as an aide for a Lower House member and city assembly member, Tomita ran for the mayoral election in April 2019 under the banner of a regional party called Osaka Ishin no Kai candidate, and won.