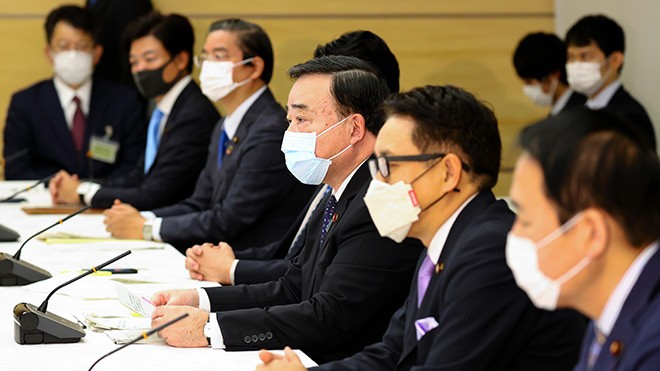 Industry minister Hiroshi Kajiyama, third from right, attends an Oct. 23 meeting of a government task force in charge of disposing treated contaminated water from the Fukushima No. 1 nuclear power plant and decommissioning the facility. (Koichi Ueda)

The government decided to delay authorizing a controversial plan to release treated radioactive water into the ocean from the crippled Fukushima No. 1 nuclear plant in response to mounting outrage from fishermen and local leaders.

Officials said the government was expected to finalize a disposal method at a meeting of relevant ministries as early as on Oct. 27.

But industry minister Hiroshi Kajiyama told an Oct. 23 meeting of a government task force on the issue that the decision could be postponed beyond late this month.

“We don’t have to decide on Oct. 27,” he said. “We are not in a situation where we need to cite a specific timing for making the decision.”

“We are totally opposed to discharging the water into the ocean. It will never gain the support of fishermen or the public,” the organization declared in a statement.

Delaying the decision would buy the government time to try to appease local fishermen and other critics.

Tokyo Electric Power Co., operator of the stricken facility, said in August last year that the nuclear plant's premises can store tanks holding up to 1.37 million tons of treated radioactive water and that the capacity will reach its limit around summer 2022.

Given that about two years are needed to construct the necessary equipment to dispose of the contaminated water and pass screening by the Nuclear Regulation Authority (NRA), the government was expected to reach a decision on the disposal method this summer.

However, the volume of radioactive water has fallen from TEPCO’s projection since this year, allowing the government more time to grapple with the issue.

In addition, TEPCO and the government are considering freeing up space for additional tanks to hold more polluted water at the plant.

That would likely give them two more years before all the tanks are full with treated radioactive water.

The release of treated radioactive water was first proposed in February by a subcommittee with the Ministry of Economy, Trade and Industry, which oversees the nuclear industry.

At the Oct. 23 meeting of the government task force, opinions of 43 officials from 29 local governments and agriculture and fisheries groups were presented.

The government had interviewed them during the course of seven hearings since April.

Also presented were 4,011 written opinions from the public that were solicited between April and July.

Most of them expressed anxiety about a detrimental environmental impact on local communities from the discharge.

Kajiyama noted the urgency of settling on the disposal method for radioactive water as early as possible.

But he also indicated that the government should take more time to consider specific ways to address the anticipated adverse impact from the release and how to alleviate concerns expressed in Japan and overseas to such a radical plan.

Fishermen are adamantly against the ocean release because of a “promise” TEPCO made to them in August 2015.

In reply to the Fukushima prefectural federation of fisheries cooperatives, Naomi Hirose, then president of TEPCO, said in a statement: “We will not proceed with any kind of disposal of treated radioactive water without gaining the understanding from the concerned parties. We will store the water in tanks on the premises of the plant.”

Tetsu Nozaki, head of the Fukushima prefectural federation of fisheries cooperatives, called the promise “the most important point in terms of maintaining a relationship of mutual trust” with the government and TEPCO during a government hearing in April.

Hiroshi Kishi, chief of JF Zengyoren, said it is “inevitable” that fishermen and other local residents will suffer from the effects of harmful rumors if the government goes ahead with the discharge into the ocean.

“After all, it is water treated after it was exposed to the reactor core,” he said.

Toyoshi Fuketa, who chairs the NRA, has made clear he sympathizes with the vehement opposition put up over the government’s plan.

“We are aware of the strong psychological and social resistance as it is the water that circulated around the reactor core,” he said.

(This article was compiled from reports by Yu Kotsubo, Yo Noguchi and Keitaro Fukuchi.)