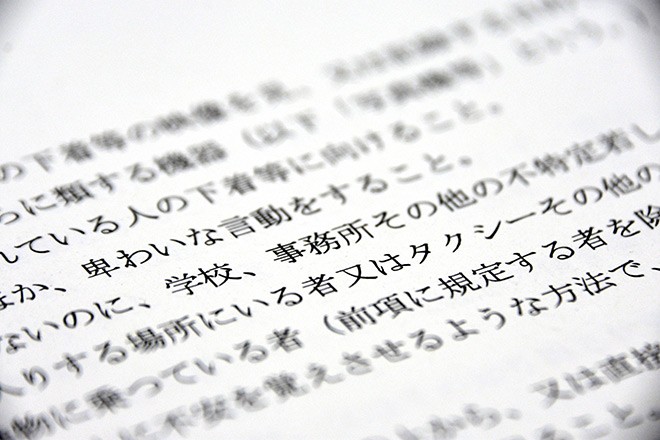 GIFU--More than 75 percent of prefectural governments have strengthened their anti-nuisance ordinances to ban sneak photography in more areas, including schools and workplaces, and close loopholes exploited by camera-toting perverts.

The ordinances, which had previously banned illicit photography only in public spaces, such as streets and trains, now also cover “quasi-public spaces.”

In recent years, a number of cases of sneak photography by colleagues or superiors at work had to be dropped because the workplace was not covered by the prefectural ordinance, an investigator with the Gifu prefectural police said.

“I felt so impatient because we could not establish a case even when the victim was in trouble,” the investigator said. “It felt like we worked (on amending the ordinance) to avenge the sufferers.”

“It didn’t stand to reason that identical acts were punishable in some cases and unpunishable in others, depending on where they took place,” said a Gifu prefectural police official, who had a hand in the amendment work.

Akita prefectural police officials faced a similar problem with a case of sneak photography at a junior high school. That investigation was dropped because the location made the act unpunishable under the prefecture’s ordinance.

An amended ordinance took effect in the prefecture in April.

Kyoto Prefecture in 2014 was the first to expand its ordinance to make sneak photography punishable at schools and workplaces.

An Asahi Shimbun survey found that 36 of Japan’s 47 prefectures had made similar amendments by September this year.

Besides schools and workplaces, many of the amended ordinances also cover assembly halls, taxis, chartered buses and other places.

“Buses that are used during company trips are also covered by our ordinance,” a prefectural government official said.

In addition, more than 20 prefectures, including Tokyo, Aichi and Okayama, have amended their ordinances to make sneak photography punishable even in private spaces, such as residences, bathing areas and toilets, where people may happen to be unclothed.

Many amendments now also ban acts of voyeurism and the aiming or installing of cameras for the purpose of sneak photography.

A growing number of sneak photographers are taking advantage of the miniaturization of cameras and the spread of smartphones.

Documents of the Justice Ministry’s “review committee on criminal law relating to sexual crimes” say the annual number of cases of sneak photography on which police took action across Japan more than doubled from 1,741 in 2010 to 3,953 in 2019. Of the number last year, 2,871 cases involved smartphones and 610 used hidden, compact cameras.

Sneak photography in quasi-public spaces accounted for 115 of the cases.

“It has become possible to take clear images and videos by using compact devices, and there is also a higher risk of online dissemination,” said Hisashi Sonoda, a professor of criminal law with Konan Law School, who welcomed the tougher penalties against sneak photography.

But he said the problem should be addressed at the national level.

“Anti-nuisance ordinances were initially intended to defend the interests of citizens in public spaces,” Sonoda said. “The right response should have been amending a national law following thorough discussions in the Diet, not about revising ordinances, which differ in detail from one prefecture to another.”

“In practice, officials could end up punishing attempted acts of sneak photography,” he said. “An ‘attempted’ offense charge should primarily be applied only to major crimes, such as murder. When that is applied to minor offenses, such as sneak photography, there is too much room for police discretion, and there is also the risk of making false charges.”

Sonoda added, “There is a need to keep watch so ordinances will not be implemented arbitrarily.”