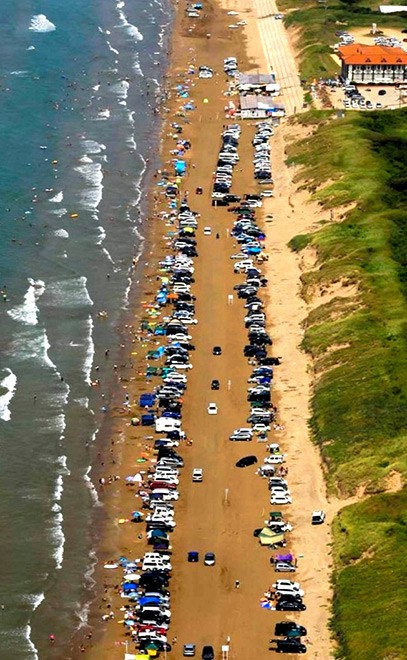 KANAZAWA--Japan could lose its only natural sandy beach where cars, motorcycles and even buses can run by the water's edge due to years of sea erosion.

Ordinary vehicles can use Chirihama beach at the base of the Noto Peninsula along the Sea of Japan because its extremely fine-grained sand hardens by absorbing water.

In 2019, more than 880,000 people visited a 6-kilometer stretch known as the Nagisa Driveway on the beach, a must-see tourist spot in Ishikawa Prefecture, in cars, sightseeing buses and motorcycles.

But perhaps not for much longer.

Sea erosion is claiming the sandy terrain at an alarming rate with an average of 1 meter being lost each year. The width of the beach has shrunk by nearly 30 percent in less than 20 years in some areas.

"The width of the beach is less than half of what it used to be," said Reiko Maeda, 66, who has worked at the nearby Chirihama Rest House for 40 years or so. "Digging for clams used to be popular, but it is very rare to see anyone doing that these days."

Prefectural and municipal officials say they are locked in a race against time to find a way to prevent the shore from disappearing altogether.

"If we don't take any measures, the beach is in danger of disappearing in the near future," said a prefectural official.

Chirihama beach, which straddles the municipalities of Hakui and Hodatsushimizu, stretches for about 8 kilometers.

Sediment carried by rivers to the sea becomes finer as it is pushed back to the shore by ocean currents and the wind before being deposited on the beach. It hardens like a paved road when the particles mix with groundwater and become highly saturated.

The beach came to attention after the driver of a sightseeing bus took the plunge, so to speak, in 1955.

The rest, as they say, is history as the beach now ranks as a prime tourist spot.

The Road Traffic Law kicks in during the summer when traffic gets heavier and a speed limit of 30 kph is imposed.

Dam and riverbank protection projects constructed since the 1970s upstream of rivers in areas surrounding Chirihama beach resulted in a dearth of earth and sand flowing into the sea and a sharp drop in the supply of sand, officials and experts say.

Another possible influence is rising sea levels due to global warming that cause high waves to gobble away at the beach.

In 2011, prefectural and municipal authorities mounted a revitalization project to restore the beach, but they have yet to find that elusive trump card.

Artificial reefs were set up offshore to weaken waves, and sand dredged on the seafloor about 35 km away was dumped into the sea.

In the 10-year period through 2019, the beach regained an average of 2 meters after 140,000 cubic meters of sand was poured into the sea. But the effort ended up at square one after the source of similarly fine-grained sand ran out.

Today, sand is being transported from other areas and piled up to nourish the beach on a trial basis.

"There is no silver bullet in restoring sandy beaches," said Masatoshi Yuhi, a professor of coastal engineering at Kanazawa University who is a member of the project. "The only way to restore them through trial and error over many years."