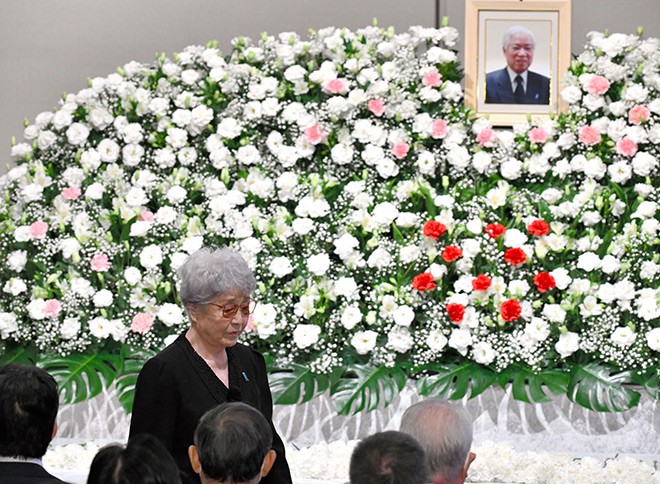 Sakie Yokota attends a memorial service for her husband, Shigeru, in Tokyo on Oct. 24. (Takayuki Kakuno)

About 300 people including Prime Minister Yoshihide Suga bid farewell to Shigeru Yokota, who led a campaign to repatriate Japanese nationals abducted by North Korea, at a memorial service in Tokyo on Oct. 24.

Yokota, who headed the Association of the Families of Victims Kidnapped by North Korea from its founding in March 1997, died in June at the age of 87.

Shigeo Iizuka, 82, who replaced Yokota in 2007 as the association leader, pledged to keep up the group’s efforts.

“All the people in Japan want to see the abduction issue resolved,” Iizuka said in a speech. “I want to reward Yokota’s service by bringing the issue to a close.”

Yokota’s daughter, Megumi, was abducted by North Korean agents in 1977 when she was 13. Yokota was never reunited with her.

In her speech, Yokota’s wife, Sakie, said, “I want people who share the same determination to strive to achieve our goal.”

Sakie, 84, added that she believes that all the abductees will someday be able to return to Japan.

Suga said the abduction issue remains a top priority for his Cabinet as well.

“I will spearhead efforts to seize every opportunity and find ways to settle the issue,” he said at the service. “I will put everything on the line to have all abductees back in Japan as early as possible.”