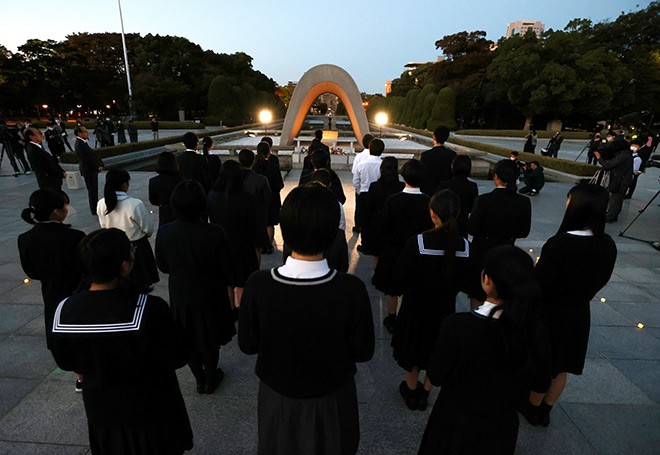 High school students gather in front of the Hiroshima Peace Memorial in Hiroshima on Oct. 25 in a gesture to inform the souls of atomic bomb victims that the U.N. nuclear weapons ban treaty is set to take effect in January. (Jun Ueda)

Hibakusha survivors of the 1945 atomic bombings of Hiroshima and Nagasaki rejoiced on learning that a long-awaited U.N. treaty banning nuclear weapons will take effect early next year but expressed dismay at the lack of a reaction from the Japanese government.

“I cannot wait for the treaty to enter into force,” said Toshiyuki Mimaki, 78, acting chair of the Hiroshima Prefecture Confederation of Atomic Bomb Sufferers Organizations.

The Treaty on the Prohibition of Nuclear Weapons is scheduled to come into force on Jan. 22 now that 50 countries and regions have ratified it. The last country to do so was Honduras on Oct. 24.

Approximately 200 hibakusha and their supporters gathered in front of the symbolic Atomic Bomb Dome in Hiroshima on Oct. 25 to mark the occasion.

The preface of the treaty pays tribute to the sufferings of A-bomb survivors, which Mimaki found deeply touching.

“It reminds me that speaking out continuously is important,” he said.

Japan has refused to sign the treaty because of its security alliance with the United States, which has pledged to protect Japan with nuclear weapons if necessary.

Haruko Moritaki, a co-representative of the Hiroshima Alliance for Nuclear Weapons Abolition, said Japan's national security policy puts it in violation of the treaty.

“As the only nation to have suffered the horrors of atomic warfare, I urge the Japanese government to ratify the treaty as soon as possible,” Moritaki, 81, said.

In Nagasaki, 200 or so people gathered in front of the Nagasaki Peace Statue to welcome the “dawn of a world without nuclear weapons.”

Masao Tomonaga, the 77-year-old head of Nagasaki-ken Hibakusha Techo Tomo-no-kai (association of people officially designated as hibakusha), said after the gathering, “Japan’s international reputation will be in ruins unless the (government) demonstrates a forward-looking stance on the treaty.”

The rally was called by five hibakusha groups in Nagasaki Prefecture, whose members spearheaded a campaign to urge residents in Japan as well as overseas to sign a petition to support the treaty.

Four of the original five organizers did not live to learn of the landmark treaty about to take effect.

Among them was Sumiteru Taniguchi, who chaired the Nagasaki Atomic Bomb Survivors Council, who died in 2017 at the age of 88.

The sole survivor is Koichi Kawano, 80, who chairs the A-bomb survivors’ liaison council of the Nagasaki Prefecture Peace Movement Center.

“We rose from the devastation 75 years ago and have dedicated ourselves to the movement by shortening our lives,” Kawano said as he paid tribute to his deceased comrades. “I wish I could share this joy with those four.”

Kawano vowed to keep pressing the Japanese government to ratify the treaty.

“I must requite their deaths by carrying out their intentions,” he said.

“Earnest discussions will start soon toward the abolishment of nuclear weapons, and Japan should join the meetings of signatory countries to the treaty, at least as an observer,” Matsui told reporters.

Matsui said he will visit Tokyo with the mayor of Nagasaki to urge the central government to get involved.

Nagasaki Mayor Tomihisa Taue called ratification of the treaty by 50 countries and regions “a big positive step toward a world without nuclear weapons” during a news conference.

“The hibakusha’s demands, the origin of the movement, inspired the world and created a huge wave,” he added. “I want to tell them that their work has come to fruition and it was not for nothing.”

“Japan, as the sole nation that was the victim of wartime atomic bombs, should have taken the leadership,” Taue said as he pledged to continuing urging the central government as well as Diet members to ratify the treaty.