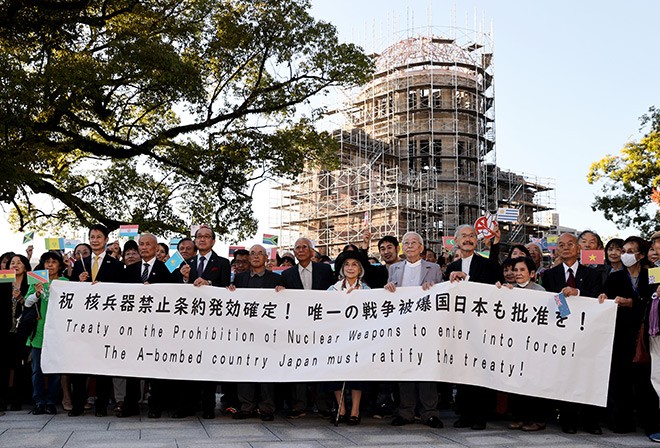 Members of seven groups of survivors of the 1945 atomic bombing of Hiroshima hold a banner pressing the government to sign and ratify the U.N. Treaty on the Prohibition of Nuclear Weapons. They are standing in front of the skeletal-shaped Atomic Bomb Dome in Hiroshima on Oct. 25. (Jun Ueda)

The Japanese government on Oct. 26 reiterated its longstanding refusal to sign a U.N. treaty aimed at dismantling all nuclear weapons and outlawing their use, citing the nation's continued reliance on the U.S. nuclear umbrella for its defense.

“It is different from our approach,” Chief Cabinet Secretary Katsunobu Kato said at a news conference, referring to the Treaty on the Prohibition on Nuclear Weapons, which Japan has not signed despite being the only country to have experienced atomic attacks. “The government’s position not to sign the treaty remains unchanged.”

However, he said Japan shared the treaty’s goal of abolishing all nuclear stockpiles.

“It is appropriate for the country to explore ways to advance nuclear disarmament steadily and realistically while taking steps to address threat to Japan’s security, including maintaining and bolstering its deterrence,” Kato added.

He declined to give a clear answer when asked about Japan’s possible participation as an observer in a meeting of signatories after the treaty goes into force on Jan. 22.

“Japan is in no situation to make a definite comment on the matter, given that few details are available now about how the meeting will be held,” he said.

The treaty passed the important benchmark on Oct. 24 with Honduras becoming the 50th country to ratify it, allowing the pact to come into force 90 days after that number was reached.

Prime Minister Yoshihide Suga, who took power last month, made clear at the outset that he will stick to the security policy crafted by his predecessor, Shinzo Abe.

The government has cited Japan’s reliance on U.S. nuclear weapons for not joining other non-nuclear powers in signing the treaty.

On Oct. 25, Defense Minister Nobuo Kishi voiced his deep-rooted skepticism toward the accord.

“It is a treaty that nuclear-armed powers cannot accede to,” he said. “Personally, I cannot help questioning the effectiveness of the treaty.”

However, fears persist within the government that the treaty could trigger a divide between the nuclear and non-nuclear powers.

While support for the accord is spreading among non-nuclear powers, the nuclear powers are pursuing the deployment of small nuclear weapons as usable arms.

For example, the Trump administration has deployed a type of low-yield nuclear warhead aboard some of ballistic missile submarines.

A senior Foreign Ministry official warned that the global community must prevent the divide from spilling over to the Nuclear Nonproliferation Treaty, the only multilateral treaty aimed at creating a binding commitment to disarmament by nuclear-armed countries.

“The situation must be averted to ensure the NPT, which is also signed by nuclear powers, will not become dysfunctional,” the official said.

Former Foreign Minister Fumio Kishida, who is from a Hiroshima constituency, had sought to find a way for Japan to join the negotiations of the Treaty on the Prohibition of Nuclear Weapons.

But he gave up the effort in 2017 out of regard for the United States.

Although the government is unlikely to change course, some members of Suga's ruling coalition, made up of the Liberal Democratic Party and junior partner Komeito, have begun calling for Japan to fulfill a role of serving as bridge between the nuclear and non-nuclear powers that the country has pledged with respect to the treaty.

Komeito proposed that Japan participate in the conference of signatories to the treaty as an observer.

“We want to hold the meeting in Hiroshima or Nagasaki,” Keiichi Ishii, secretary-general of Komeito, said during an appearance in a TV news show.

Local assemblies are also stepping up pressure for the government to act by adopting position documents.

Data by the anti-nuclear group Gensuikyo (Japan Council against Atomic and Hydrogen Bombs) showed that 495, or more than one-quarter of the nation’s 1,788 local assemblies, have done so.

Most of the opinions called nuclear weapons “inhumane” in pressing the government to sign and ratify the Treaty on the Prohibition of Nuclear Weapons.

(This story was written by Hideki Kitami and Sokichi Kuroda.)