The bicycle rider in this video taken in Okegawa, Saitama Prefecture, on Oct. 5 is the first cyclist arrested over reckless riding under the revised Road Traffic Law that took effect in June. (Provided by an eyewitness) 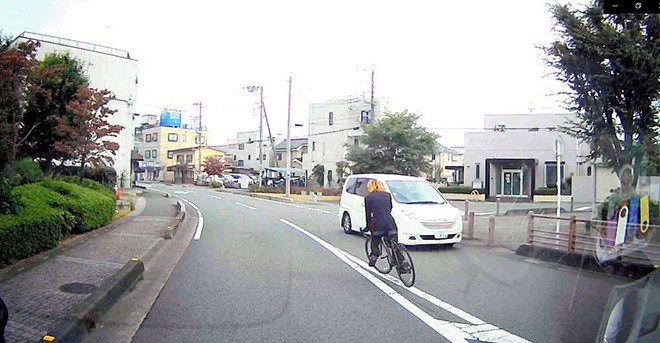 A cyclist veers into the oncoming traffic lane. (From footage of a dashboard camera provided by an eyewitness)

Saitama prefectural police arrested Akihiko Narushima, 33, a part-time worker who lives in Okegawa, Saitama Prefecture, on Oct. 26 on suspicion of violating provisions added to the law in June against interfering with other drivers.

Narushima is accused of obstructing oncoming traffic by abruptly jutting into the opposite lane when he was cycling on a road in Okegawa on Oct. 5, according to the sources. The entire scene was captured by a dashboard camera in a car that was trailing Narushima.

The 67-year-old driver of that car said Narushima zigzagged around the centerline of the road for about two minutes. During that period, the bike rider crossed into the opposite lane four times when cars approached, the witness said.

On the same day, Narushima was arrested for allegedly grabbing the car driver’s relative, who cautioned him about his reckless riding, by the collar and committing other assaults.

He is currently on probation after he was found guilty in February of violating the Road Traffic Law and other charges. He had been indicted over a similar dangerous riding incident in Ageo, Saitama Prefecture.

Narushima has frequently been seen suddenly crossing into the oncoming lane while cycling in the area, according to the sources. Local residents have referred to him as “hyokkori otoko,” which means a man who suddenly pops out.

Bicycles are classified as “light vehicles” under the Road Traffic Law. Under the law’s new provisions, interfering with other drivers can also apply to bicycle riders, and offenders face imprisonment or a fine.

The revision added reckless riding to 14 other types of actions defined as dangerous behavior by cyclists, such as riding under the influence of alcohol and ignoring a red light.

In addition to moving into the oncoming traffic lane, suddenly stopping for no reason, repeatedly ringing the bicycle bell and other actions are categorized under reckless riding.

Any bicycle rider aged 14 or older found guilty of violating the law twice over a three-year period will have to pay for and sit through three-hour lectures by a prefectural public safety commission about safe riding.