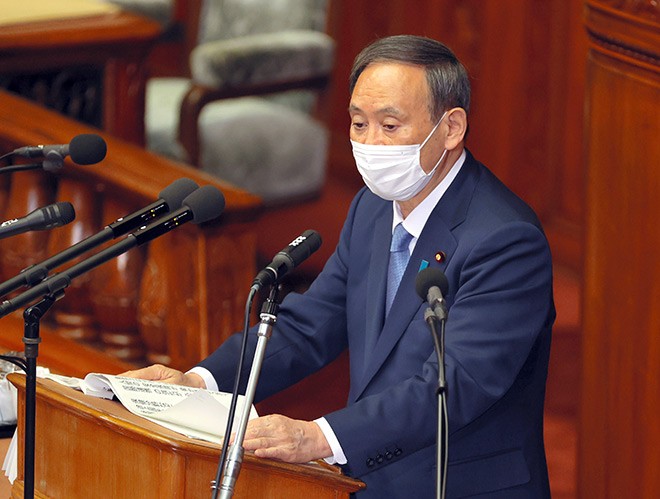 Prime Minister Yoshihide Suga vowed on Oct. 26 that Japan will achieve net zero greenhouse gas emissions by 2050 in his first address in the Diet.

Suga, elected prime minister last month, said in his first policy speech to both chambers of the Diet, where he laid out his government's priorities, that shifting away from fossil fuels is a pillar of the nation's growth strategy.

“We will achieve net zero emissions of greenhouse gases by 2050,” he said on the opening day of the extraordinary Diet session.

The government’s previous target was an 80 percent reduction by 2050.

Japan will bolster research and development of next-generation solar cells, carbon dioxide recycling and other cutting-edge projects to make the ambitious goal a reality, he said.

He also said he will ensure that the central government and local governments will have a forum where they can weigh their options to move toward a carbon-free society.

In addition to promoting nuclear energy, Suga vowed to “drastically” transform Japan’s policy on coal-fired power generation because it is a major source of greenhouse gases.

He also pledged to push for “sweeping regulatory reform” to prepare society for a post-pandemic era, with the proposed digital agency spearheading transformational efforts.

The government will accelerate its preparations so that the agency can set up shop next year, Suga said.

He also mentioned the five-year target for standardizing and integrating computer systems used by the central and local governments to digitize all their administrative procedures.

The prime minister said the government will work to ensure fertility treatments are covered under the national health insurance program by scrapping the existing income limit for those seeking medical assistance.

Until the time that is put in place, the government will expand subsidies for couples seeking fertility treatments.

As for measures to keep the economy going amid the coronavirus pandemic, he cited the government’s target of being able to conduct an average of 200,000 daily tests and secure enough volume of vaccines to cover all of Japan’s population by the first half of next year.

“We will swiftly take the necessary steps,” he said of measures for the economy and pandemic. He pointed to the government’s program to ease the tourism industry’s pain by subsidizing tours and providing relief packages to businesses.

He also mentioned efforts to promote the My Number social security and taxation identification cards, a plan to resolve the issue of children on waiting lists for licensed child care services and the need for a nationwide debate over his Liberal Democratic Party’s initiative to amend the Constitution.

The extraordinary Diet session will be held through Dec. 5.

Suga’s controversial refusal to appoint six scholars to the Science Council of Japan is expected to dominate the Diet debate as a key issue.