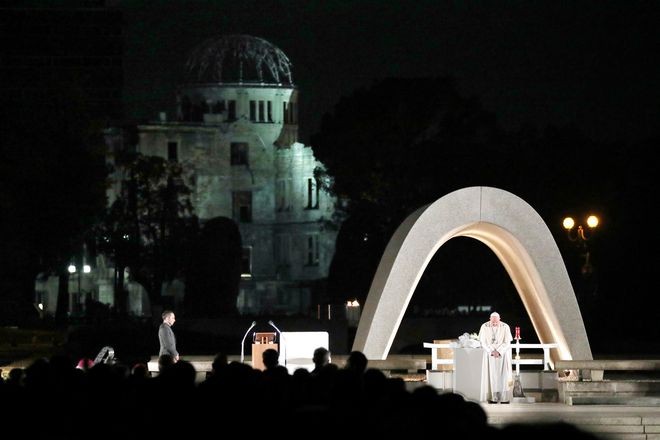 Nuclear weapons must not exist in human society, no matter in what form.

A groundbreaking treaty designed as an international code of conduct for promoting the global campaign to realize “a world without nuclear weapons” is now set to become legally binding.

The Treaty on the Prohibition of Nuclear Weapons was adopted three years ago by the United Nations. On Oct. 24, Honduras became the 50th country to ratify the accord, the minimum needed for it to enter into force as international law. It will go into effect on Jan. 22, next year.

The treaty prohibits signatory nations from developing, testing, producing, manufacturing, possessing, using and even threatening to use nuclear weapons. Beyond its long-term importance as a step to open a new chapter in the nuclear disarmament movement, the treaty can also lead to swift changes that make it even more difficult to use nuclear arms.

As U.N. Secretary-General Antonio Guterres said, the 50th ratification of the treaty was “the culmination of a worldwide movement” driven by efforts based on broad solidarity among parties committed to the cause, including survivors of the 1945 atomic bombings of Hiroshima and Nagasaki, or hibakusha, and the governments and citizens of countries promoting the pact.

The Japanese government, however, has refused to join the group celebrating the creation of this historic international framework for progress toward a future free from the threat of nuclear arms.

After 75 postwar years of trying to convey the horrors of nuclear devastation to the world, how long does the Japanese government intend to continue turning its back on this valuable treaty to ban nuclear arms?

In its preamble, the treaty pays special respect to the atomic bomb survivors by saying the nations signing it are “mindful of the unacceptable suffering of and harm caused to the victims of the use of nuclear weapons (hibakusha), as well as of those affected by the testing of nuclear weapons.”

It asserts that “any use of nuclear weapons would also be abhorrent to the principles of humanity and the dictates of public conscience.”

There are nearly 14,000 nuclear warheads in the world. No nuclear weapon has been used in war since the destruction of Hiroshima and Nagasaki in August 1945, not as an inevitable result but only as a fortunate accident.

At the heart of the treaty is a determination to stop putting the fate of the world in the hands of the major powers, which keep relying on dangerous nuclear arms.

By a curious coincidence, this year, the world has been struck by the new coronavirus pandemic. Dealing with an infectious disease requires cross-border cooperation. But certain major countries have been pursuing “me-first” agendas, creating deep divisions in the world.

The nuclear ban treaty also has important implications for efforts to build international cooperation for fighting security threats that transcend borders, such as armed conflicts, infectious diseases and environmental hazards, since it also symbolizes growing recognition of global citizenship, which means acting for global common interests.

The achievement of the ratification threshold to make the treaty international law should mark a first step in the process of steering the world away from its fixation on nuclear deterrence and toward the elimination of nuclear arms.

The treaty is not legally binding on those nations that refuse to sign on to it. But it has at least the effect of spreading the ethical doctrine that nuclear arms are an “absolute evil.” It will help deter the risk of a nuclear power actually using an item in its arsenal.

But the global state of nuclear arms control has gotten worse.

Last year saw the collapse of the Intermediate-Range Nuclear Forces (INF) Treaty to ban the United States and Russia, which together possess more than 90 percent of the nuclear warheads on earth, from fielding land-based missiles with ranges between 500 and 5,500 kilometers.

The two nuclear superpowers are now negotiating a deal to extend their last remaining arms control pact, New START (Strategic Arms Reduction Treaty), ahead of its expiry next year.

The increasingly acrimonious conflict between the United States and China, sometimes referred to as a new cold war, is also raising concerns about a fresh nuclear arms race.

The world has failed to stop the nuclear armament of India and Pakistan as well as North Korea’s program to develop atomic bombs.

In the coming years, the international community will have to step up its efforts to reduce nuclear arms by using the new nuclear ban treaty and the conventional Non-Proliferation Treaty (NPT) as the two pillars of the campaign.

While criticizing the nuclear ban accord as “unrealistic” and “divisive,” major nuclear powers are demanding that the NPT signatories comply with the pact. It will become increasingly difficult for these nuclear powers to justify their double standards.

While allowing the five original nuclear powers including the United States, Russia and China to retain their nuclear arsenals, the NPT also requires them to make efforts to cut back on their nuclear arms.

The leading nuclear powers should do serious soul-searching over the fact that they are the ones to blame for the rift between the nuclear club members and non-nuclear nations because they have maintained their nuclear arsenals as their “privilege.” In addition, they have failed to make any serious undertaking to reduce their stockpiles of nuclear warheads.

Japan is the only country that has suffered nuclear attacks during war. It has an obligation to lead the international efforts to bring the world toward a nuclear-free future while putting pressure on the United States and other major nuclear powers to scale down their nuclear armories.

BRING NUCLEAR POWERS ON BOARD

In an open letter issued this autumn, 56 former world leaders and top officials representing 22 U.S. allies including Ban Ki-moon, a former South Korean foreign minister who served as U.N. secretary-general from 2007 to 2016, urged their governments to sign the nuclear ban treaty.

There are some signs of change in the stances of these nations. The new coalition government of Belgium that came to power this autumn, for example, has started exploring possibilities of supporting the treaty.

But the Japanese government has remained wedded to its traditional policy of relying on the nuclear deterrence provided by the United States, arguing that the treaty is at odds with its “approach.”

Despite its pledge to pursue the elimination of nuclear weapons, Tokyo keeps sticking to the status quo in which its security is protected by the U.S. “nuclear umbrella.”

If it really wants to serve as a bridge between the nuclear powers and non-nuclear countries, Japan should first try to persuade the nuclear armed nations into serious dialogue with the treaty parties without dismissing the accord out of hand.

A conference of the treaty parties will be held within a year of its coming into force.

Talks will start for specific systems for verification, support for victims of nuclear tests and other related issues.

Japan has a wealth of experience and expertise concerning medical care and other support for people exposed to radiation. The government should consider inviting international conferences related to the treaty to be held in Hiroshima and Nagasaki to demonstrate its commitment to the cause.

To do so, the Japanese government should first change its official position on the accord and take part in the conference of the parties as an observer. It should then start moving toward signing the treaty as soon as possible.

Japan should not keep acting in ways that only further deepen the disappointment of hibakusha and many members of the international community.