Restoration work is still under way at Shuri-jo Castle Park in Naha, Okinawa Prefecture, following a disastrous fire on Oct. 31, 2019. (The Asahi Shimbun) 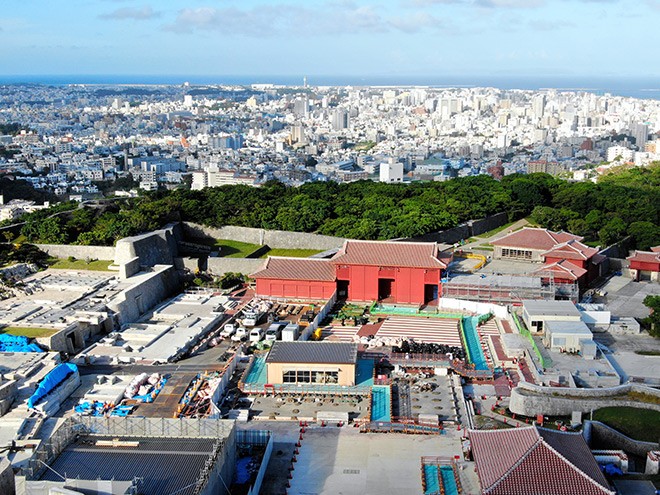 An aerial view of Shuri-jo Castle Park in Naha, Okinawa Prefecture, on Oct. 20. A makeshift structure stands on the site of the castle’s ruined Seiden main hall. (Minako Yoshimoto)

NAHA--Much of Okinawa Prefecture's treasured Shuri-jo castle remains a desolate landscape a year after fire gutted the site that was a center of politics and culture for the Ryukyu Kingdom (1429-1879).

With the Oct. 31 anniversary of the disastrous event approaching, The Asahi Shimbun obtained permission from Shuri-jo Castle Park to fly a drone over the historic area to grasp the extent of restoration work that is set to start in 2022 and be completed in 2026.

Nine structures were damaged in the blaze that flared late in the evening and continued into the early morning hours, leaving the splendid Seiden main hall and the Hokuden north hall in smoldering ruins.

The foundations of the original castle, which was destroyed during the Battle of Okinawa in 1945, are designated as a World Heritage site.

People in Japan as well as overseas felt inconsolable over the loss of the invaluable reminder of Okinawa's heritage and mounted a donation campaign to help kickstart restoration work.

“Una,” a plaza close to the impressive Hoshinmon gate that was paved in red and white stripes, was among one of the worst damaged areas.

The debris has been removed, and damaged sections of the plaza have been paved in concrete and other materials.

Volunteers are working to remove damaged plaster in areas cordoned off by blue-colored tarps and where heavy construction machinery currently stands idle.

Paths are set up for visitors entering through the Hoshinmon gate.

A temporary structure has been erected on the site of the Seiden main hall.

Inside the building lie the foundations of the original castle that are designated as a World Heritage Site. Visitors can view them through a glass window.

Charred debris is stacked along walkways used by visitors.

Toshihiro Moriguchi, who heads the office that manages Shuri-jo Castle Park, said the layout for the restoration work on the Seiden main hall will be completed by the end of next fiscal year.

Visitor numbers to the park have fallen sharply due to the novel coronavirus pandemic.

“It is important to show progress in the restoration work and make the processes widely available,” he said.

(This article was written by Minako Yoshimoto and Jun Kaneko.)