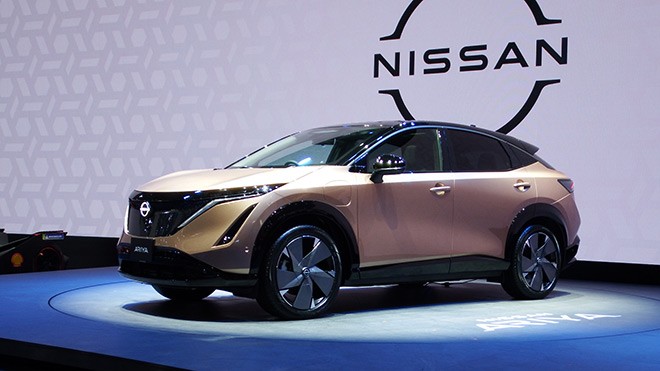 Nissan Motor Co.’s new electric vehicle Ariya in Beijing in September, which the company plans to introduce in the Chinese market by the end of next year (Asahi Shimbun file photo)

BEIJING--China announced it will shut out new sales of conventional gas-powered vehicles and allow only electric and hybrid versions from 2035, forcing automakers around the world to rethink their strategies in the world’s largest auto market.

The policy, announced Oct. 27 by the Ministry of Industry and Information Technology, goes further than many other countries that are giving preferential treatment to environmentally compatible vehicles.

China is focusing its auto manufacturing on energy efficient vehicles that generate less pollution, such as EVs, plug-in hybrids and fuel cell models, which represent more than half of new offerings.

The Chinese government will craft specific steps toward that goal based on the ministry's road map.

The announcement of the policy followed Chinese President Xi Jinping’s pledge to the U.N. General Assembly in September to achieve zero emissions of greenhouse gases by 2060.

China spews out more pollution than any other country.

To turn the vow into a reality, Beijing is expected to push for a range of bold measures.