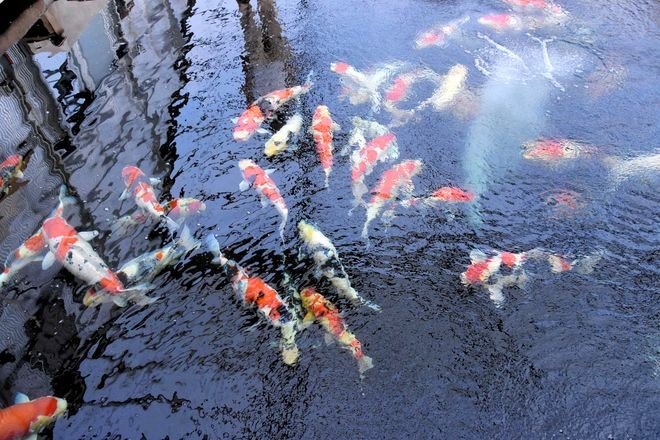 Normally at this time of year, wealthy foreigners descend on Niigata Prefecture to inspect and purchase brightly colored, prized specialty koi in transactions that sometimes see tens of millions of yen changing hands for a single specimen.

It takes only about 90 minutes by Shinkansen bullet train from Tokyo to Nagaoka, and then nearly an hour by car to reach the mountain area where many carp-culturing pools are situated.

One wholesaler based in Ojiya city said he usually tours carp ponds on a daily basis in the fall with two dozen or so visitors from overseas. He usually needs more than one van.

But this is not a normal year.

The novel coronavirus pandemic upended global travel, resulting in a sharp drop in visitors eager to monitor every aspect of their purchases being shipped overseas.

Anxieties are running high among local carp farmers as they turn to new ways to reel in overseas consumers in the face of the COVID-19 crisis.

“Nishikigoi” carp, also known as koi, are coveted around the world as luxury display fish and sometimes called “swimming gems,” which is often reflected in their prices.

A single specimen can fetch hundreds of thousands of yen and sometimes go sky high. In 2018, a Taiwanese purchased a nishikigoi for more than 200 million yen ($1.9 million).

For the 300 carp farming agencies in Niigata Prefecture, the largest production zone for the fish, autumn is the most important season.

Nishikigoi are kept in indoor pools during winter because of heavy snow. They are transferred to larger outdoor ponds in spring so they can spend their summer there, and by autumn, many nishikigoi have reached adulthood and will sell for high prices. This year, the fate of those prized fall fish is up in the air.

“Carp that grow big in the fall cannot be accommodated in the pools and will have to be discarded if they remain unsold,” said Kazuhiro Hirasawa, 32, who manages about 80 carp ponds mainly in the Yamakoshi district of Nagaoka.

Foreign buyers from Hong Kong, mainland China and Europe have been the driving force behind the species’ popularity.

International demand for Nishikigoi has grown at a rapid clip in recent years. Cargo handling company Rinko Corp. is responsible for freight shipment at Niigata Airport in Niigata city. The company said nishikigoi accounted for roughly 90 percent of international cargo weight that departed from the airport last year.

Data from Niigata Prefecture shows that nishikigoi exports from the prefecture totaled 2.619 billion yen in 2019, a 1.4-fold increase over the past five years.

Overseas customers flock to production facilities to examine the koi up close for color, pattern and body shape. It also offers a chance to spot any damage to ventral fins.

Even though travel restrictions brought on by the pandemic are now partially eased, business has been slow to bounce back. The downward trend in visitors is expected to result in a drastic plunge in sales.

Masaru Hosomi, 53, a carp farmer in Ojiya, worries about growing expenses weighing on his operations if he continues keeping the fish, given their collapsing prices.

“I am anxious that carp market values may decline, although fuel and power charges, as well as other costs, are as expensive as usual,” said Hosomi.

Nishikigoi are said to have originated during the Edo Period (1603-1867) and are indigenous to a local mountain range covering Ojiya and Nagaoka.

The fish have become Niigata’s most important regional specialty.

According to the central government’s trade statistics, total exports of display fish doubled from 2009 to 4.3 billion yen in 2018. Nishikigoi accounted for 90 percent of them.

More than 60 percent of those who raise nishikigoi for exhibition purposes are in Niigata Prefecture, according to the 2018 fisheries census from the farm ministry.

This is the second time this year that famers have faced a pandemic-induced seasonal koi crisis.

Smaller nishikigoi are marketed at cheaper prices in spring. But when the first wave of the pandemic struck, shipments were halted due to travel restrictions enforced around the world.

Producers decided to wait until summer for the restrictions to be lifted, but carp are not normally exported in such sweltering temperatures.

Carp agents rose to the challenge by shipping their product in heat-resistant containers made of foam polystyrene. Nishikigoi are normally placed in bags with oxygen and water inside of corrugated boxes for export.

The Nagaoka city government distributed 1,500 of the containers, including ones developed by a manufacturer in Osaka Prefecture, to carp cultivators. It budgeted 5.25 million yen for the effort.

Some producers’ summer sales dropped by 70 to 80 percent, but others said their carp sold as well as usual thanks in part to the government aid.

Once again, the local fish farmers are innovating in the face of a sales crisis.

A carp cultivators’ association in the Chuetsu region of Niigata Prefecture is developing its first carp shopping site to counter the drop in visitors.

The Niigata branch of the All Japan Nishikigoi Promotion Association (JNPA), which is comprised of 100 carp producers, developed an online system that opened Oct. 20 to display nishikigoi available in stock.

It lets customers complete the trading process online without having to directly visit the production facilities.

Once farmers register information about their nishikigoi under the system, the data can be shown to brokers on a screen displaying the appearance of the fish, their type, age and the producers’ contact information.

The website was designed by an online system developer in Ojiya, the first time a carp farmers’ organization in Niigata Prefecture has introduced an online transaction system.

“The site may prove a lifesaver for some producers,” said Mitsunori Isa, 49, head of the JNPA’s Niigata branch.
Hirasawa said he is confident it will help bolster the popularity of koi and lure new customers.

“The system will allow buyers and fans who are unable to visit the carp ponds to check the nishikigoi for themselves,” Hirasawa said. “Carp that do not sell well will also be shown. The market may expand further with this.