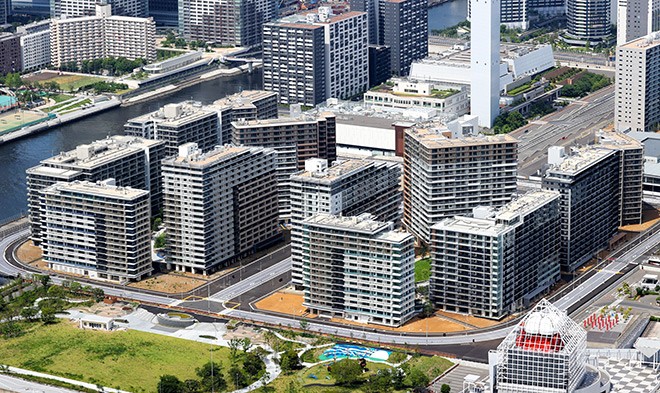 A special health facility dedicated to infectious diseases will be set up in the 2020 Tokyo Games athletes' village to prevent novel coronavirus cluster infections from breaking out among the competitors.

Medical staff and public health personnel will be on hand to handle any health concerns involving both domestic and foreign athletes, with an emphasis on treating outpatients with high fevers and other symptoms.

Officials of the central and Tokyo metropolitan governments, along with the Tokyo Organizing Committee of the Olympic and Paralympic Games, discussed setting up such a facility on Oct. 27.

Officials intend to create an infectious disease response center within the organizing committee and then open the facility inside the athletes’ village in Tokyo’s Harumi district.

During the Games, approximately 30,000 athletes and coaches are expected to pass in and out of the village. Organizers have discussed what to do to strengthen the community's medical system.

Athletes and coaches will be asked to report to the center with updates on their body temperatures, health condition and activities.

They will also be asked to carry a smartphone that has a COVID-19 contact-tracing app introduced by the health ministry called COCOA.

When someone is suspected of having come into contact with the virus, the collected information will be promptly shared among Games officials.

The organizers of the sports extravaganza had planned to establish a general infirmary in the village from even before the pandemic hit.

Doctors will see outpatients with high fevers at the infirmary and check if any of them have contracted the virus, while private testing companies will conduct COVID-19 tests.

Officials are also considering opening a quasi-public health center either inside or near the athletes' village to transport any infected individuals to a hospital and trace contacts.

By doing so, the officials hope to reduce the burden of Chuo Ward’s public health center, which manages health care at the athletes’ village.

COVID-19 patients with mild and no symptoms will likely be asked to stay at hotels and other accommodations rather than at hospitals.

Tokyo 2020 Games organizers began asking university hospitals and doctors’ associations for cooperation to secure more than 10,000 doctors and nurses to serve at first-aid rooms at each venue before it was announced that the event would be postponed until the summer of 2021 due to the global health crisis.

The metropolitan government also plans to deploy doctors from the Tokyo Medical Association around venues at the Games.

But the head of the association expressed concerns over the plan at a news conference earlier in October.

“Hospitals and clinics, especially those in Tokyo, are exhausted. More and more are facing tight finances,” Haruo Ozaki said. “Honestly speaking, I think it will be difficult for us to work cooperatively with the Games, including taking measures to prevent heat-related illnesses in a scorching summer.”

Tokyo 2020 CEO Toshiro Muto called for efforts to “avoid generating a harmful effect on local medical systems” during a news conference on Oct. 27.

“I hope we find the best solutions while discussing the matter with related people,” he added.

(This article was written by Yusuke Saito and Chiaki Ogihara.)