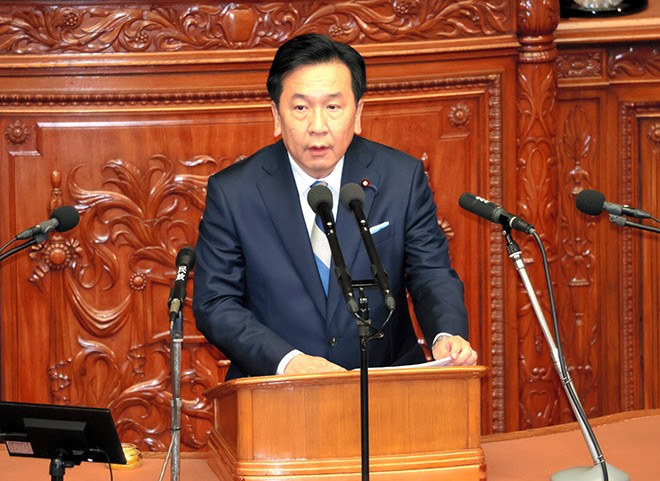 The head of the nation's largest opposition party called on the government to offer significant tax cuts and other relief measures to help people reeling from the economic impact of the novel coronavirus pandemic.

Yukio Edano of the newly formed Constitutional Democratic Party of Japan also landed political blows when facing off against Prime Minister Yoshihide Suga in the Diet, calling his rejection of nominees to the Science Council of Japan illegal.

Edano called for more pandemic relief measures during the Oct. 28 start of the question-and-answer session on Suga’s inaugural policy speech to the Diet earlier this week that laid out the government’s agenda.

He also proposed that the government exempt people whose annual income is below 10 million yen ($95,900) from paying income taxes and issue a time-limited reduction in the consumption tax rate, now at 10 percent. He suggested cutting university tuition fees by half to help poor students.

Edano said the opposition parties are determined to share political responsibility for the government’s economic policy to mitigate the economic hardships heaped on people and businesses by the health crisis.

He suggested that the opposition bloc and ruling coalition engage in collective discussions on the topic.

Edano also used his speaking time in the Diet to question the prime minister over his decision to reject six scholars from membership to the Science Council of Japan and raised Article 6 of the Constitution that states “the emperor appoints a prime minister based on the Diet’s nomination.”

He said Suga’s refusal to appoint the scholars was illegal and leaves room for the emperor to make a judgment on the appointment of the prime minister.

Suga contends he did not see the full list of experts recommended for membership before making the appointments.