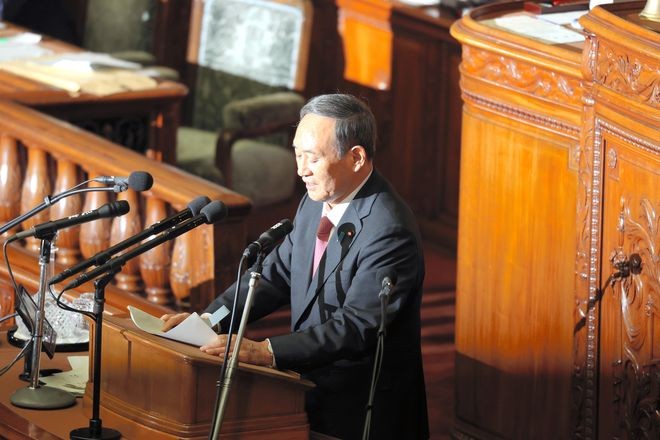 Prime Minister Yoshihide Suga’s responses to opposition questions about his policy speech offered no reason to expect him to deliver on his promise of “constructive debate” at the Diet.

Suga uttered many words about the government’s policies but gave short shrift to the issues raised by opposition parties by simply repeating his past remarks about them.

On Oct. 28, the Diet started a session to allow party heads to question Suga over his speech about his administration’s policy agenda delivered two days earlier at the outset of the extraordinary Diet session.

The focus of public attention was on his responses to questions concerning his much criticized decision to reject six of the nominees to the Science Council of Japan, a topic he completely ignored in his address.

Suga made it clear that he has no intention to retract his controversial decision, saying the prime minister is “not required to appoint all the candidates for council membership as recommended” by the body.

He reiterated that the decision was aimed at ensuring that the council will engage in “comprehensive and bird’s-eye view-based activities.” But he made no convincing case of why refusing to appoint the six scholars will help achieve the goal.

Suga started this week citing other reasons for his move, saying the council does not have many private-sector or young researchers and is dominated by those from a few specific universities and geographical areas.

In responding to questions about this issue during the Oct. 28 Diet session, Suga referred to this point by saying his decision was also designed to secure “diversity” of the council membership. But this is not a good reason for rejecting the six, either.

Suga seems to be trying to use his power to make appointments to pressure the council to act in line with the administration’s policies. He cannot dispel this suspicion no matter how many ad-hoc explanations he cooks up to justify his decision.

Suga’s answers also left little doubt that he has no intention of tackling the “negative legacies” of the previous administration of Shinzo Abe, his predecessor and former boss.

Suga, for example, dismissed the need for a fresh investigation into the political scandal about the dubious sale of state-owned land to Moritomo Gakuen, a school operator linked to Abe’s wife, Akie, claiming the matter was settled by the Finance Ministry’s in-house inquiry and prosecutors’ criminal investigation.

Suga also said there was no problem with the process leading to the government’s decision to allow the Kake Educational Institution, run by a close friend of Abe, to open a new veterinary medicine faculty.

Suga said he will not hold the annual cherry blossom viewing party, traditionally hosted by the prime minister in the spring, but showed no willingness to uncover facts about the suspicion that Abe used the event for personal gain.

With regard to the falsifications of official documents, Suga only said it is important to prevent such misconduct from occurring again.

Does he believe that he will be able to restore public trust in politics and administration without cleaning up the rot from the past?

Suga also failed to provide sufficient explanations about his future vision for Japanese society or about the political philosophy behind his key policy initiatives.

In querying Suga as to his policy speech on Oct. 28, Yukio Edano, chief of the newly formed Constitutional Democratic Party of Japan, the largest opposition bloc, argued the need of an alternative to neoliberalism, which denotes a strong preference for free competition and efficiency, and called for the creation of a “symbiotic society” where politics and administration work together to support mutual help.

Edano pointed out that people can no longer get through these rough times on their own due to radical and violent changes in the social environment, such as the shrinking and aging of the population, an increasing number of single-member households and declining local communities.

He also pointed to a sharp increase in areas where even relying on mutual aid is difficult. The opposition leader criticized Suga’s policy principle that people should pursue “first self-help, then mutual help and finally public help” for being “outdated.”

His responses deserve criticism for lacking any broad perspective or long-term vision.

When asked about his basic policy of dealing with questions at the Diet, Suga stressed the importance of “meticulous explanations” and “constructive debate.” He needs to match his words with actions in Diet sessions in the coming days.