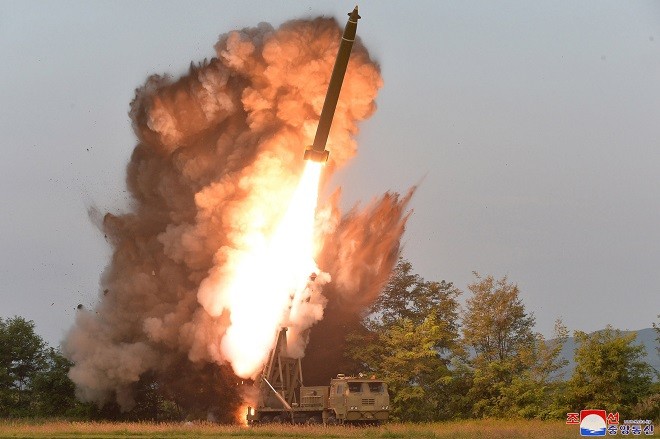 A test launch of an apparent solid-fuel missile is conducted on Sept. 10, 2019, in North Korea. The news was reported by the Korean Central News Agency the following day. (Korea News Service)

North Korea’s tactics to conceal its military technologies appear to have succeeded while Tokyo, Washington and Seoul continued scrambling to enhance cooperation over differing national interests, history-related issues and the COVID-19 pandemic.

The military power of the increasingly reclusive state has strengthened, and Japan, the United States and South Korea have been struggling to build an effective system to respond to the threat from Pyongyang.

The most eye-catching exhibit was a seemingly new intercontinental ballistic missile (ICBM) that was slightly larger than the Hwasong-15 ICBM. The Hwasong-15 is believed capable of traveling more than 12,000 kilometers to reach the U.S. east coast.

A submarine-launched ballistic missile (SLBM) that may have been newly developed was also on display that day.

Still, many questions have been raised over those “new weapons.”

The mobile launcher carrying the new ICBM had as many as 11 axles, meaning the system cannot run on rough or sloping roads. Therefore, the launching unit cannot travel long distances, making it difficult to use in combat.

Some experts also doubt that Pyongyang has the technology to build a submarine that can fire an SLBM.

In past military parades, North Korea carefully selected weapons that it wanted to show the global community while intentionally keeping some important technologies secret.

One of North Korea’s confidential achievements that was recently confirmed is the introduction of solid fuel for missiles.

Missiles that use solid fuel, which can be completed in advance through mixing with an oxidizing agent, can be fired more quickly than their liquid-fuel counterparts.

In addition, enemies would have a much more difficult time intercepting solid-fuel missiles because they can more easily be fired continuously.

According to South Korean military sources, Seoul once estimated it would need 30 minutes to pre-emptively strike a missile base in North Korea after learning of Pyongyang’s plans to launch liquid-fuel missiles.

But South Korea would have only around 15 minutes to prevent a solid-fuel missile launch by its northern neighbor.

Tokyo’s 2020 defense white paper states that solid-fuel SRBMs with a range of 400 to 600 km can hit only some parts of western Japan. But the technology is expected to be applied to longer-range missiles as well.

North Korea already has the ability to launch the liquid-fuel Rodong ballistic missile, which has a maximum range of 1,300 km, possibly fitted with a nuclear warhead, according to the white paper. Therefore, missiles from Pyongyang can cover most areas of Japan.

FAILING TO RAMP UP COOPERATION

After Pyongyang conducted its third nuclear test in February 2013, Washington and Seoul started overhauling their joint Operations Plan 5027 to assume a large-sale North Korean invasion of the South, like in the 1950-53 Korean War.

A new joint strategy, called Operations Plan 5015, was devised in 2015, when North Korea appeared capable of striking all parts of South Korea with nuclear-equipped SRBMs. Under that plan, Washington and Seoul are supposed to pre-emptively hit North Korean missile bases immediately after signs of launches are detected.

Within 30 minutes, around 700 missile facilities and other strategic targets in North Korea will be attacked.

Such an emergency on the Korean Peninsula would inevitably involve Japan.

In 2017, tensions between the United States and North Korea reached a boiling point after Pyongyang’s series of ballistic missile launches.

Katsutoshi Kawano, then Japan’s chief of staff, the highest-ranking officer of the Self-Defense Forces, and Joseph Dunford, chairman of the U.S. Joint Chiefs of Staff at the time, held a meeting in July that year.

Dunford told Kawano that he would be notified beforehand if the situation reaches a level at which a political decision must be made, according to Kawano.

He said he realized Dunford was speaking about the possible use of force against North Korea.

Following their talks, Kawano quickly started brainstorming with some of his aides. They concluded that Washington’s use of force could lead to a situation in which Japan also becomes a target of attack.

Under such a scenario, Tokyo would be expected to offer rear-line support for the U.S. military.

Kawano, therefore, simulated what Japan would be able to do under its pacifist legal system and how necessary orders should be issued in the SDF.

A direct attack from North Korea against Japan would require a retaliatory strike by Tokyo and Washington together.

An emergency on the Korean Peninsula would also create the problem of how to protect Japanese citizens in South Korea. Seoul’s cooperation would be essential, and the country could ask Japan to accept South Koreans who are fleeing the crisis.

Tokyo, Washington and Seoul, however, have not held discussions to respond to such an emergency, partly because of a wide perception gap among them.

South Korea wants to limit the trilateral military framework to countermeasures against North Korea, but Japan and the United States would like South Korea to work together to rein in the rapidly increasing military presence of China as well.

Differences over the issue of wartime laborers and other history-related problems can also be cited as a factor derailing the Tokyo-Seoul security friendship.

Since spring this year, Tokyo, Washington and Seoul have been moving to organize a trilateral meeting of national security agency chiefs and other top security personnel, but the talks have been postponed on three occasions due to the novel coronavirus pandemic and other reasons.