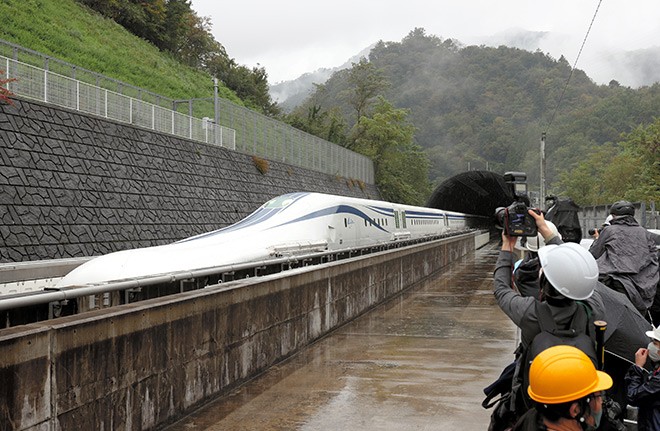 The improved test vehicle of the magnetic-levitation Linear Chuo Shinkansen line is shown to the media in Tsuru, Yamanashi Prefecture, on Oct. 19. (Wataru Sekita)

Central Japan Railway Co. (JR Tokai) says it expects to record red ink for the full year for the first time since it was established through privatization in 1987.

The major railway company announced in its latest forecast on Oct. 28 that it will likely post a net loss of about 192 billion yen ($1.84 billion) for fiscal 2020, which ends in March. JR Tokai marked a net profit of 397.8 billion yen the previous fiscal year.

The steep drop is due to plummeting ridership on its flagship Tokaido Shinkansen line, which resulted from the coronavirus pandemic.

The number of passengers on the Tokaido Shinkansen in April and May dropped by 90 percent year on year. Even after picking up a bit over the summer, it remains low. It netted 44 percent of its year-earlier ridership this month through Oct. 27.

But Kaneko added that the company had secured funds for the construction of the magnetic-levitation Linear Chuo Shinkansen line.

“We will continue to make great efforts to proceed with the plan,” Kaneko said.

The company expects transportation revenue will recover to just up to 60 percent at the end of March 2021, compared to normal years.

JR Tokai has been asking executive officers and board directors, excluding outside members, to return 10 percent of their remuneration on a voluntary basis from May to October. But it will now extend that request for another three months.

The company also announced a deficit in its midterm financial statement ending September 2020, marking the first time that it has ever been in the red as well.