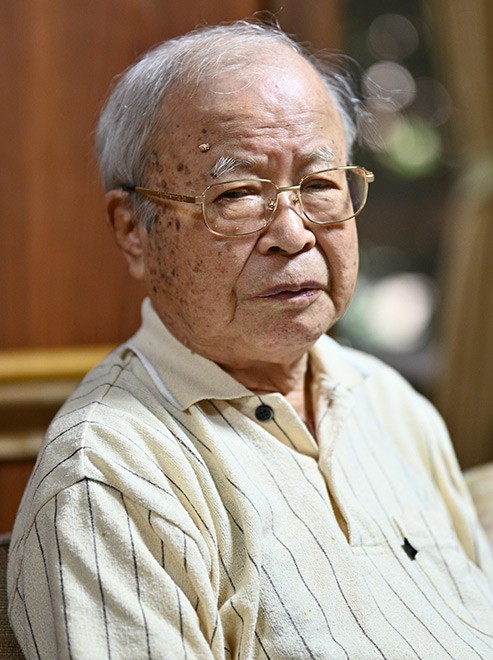 Every time a crime is committed by a U.S. soldier in Okinawa Prefecture, I am reminded of “The Cocktail Party,” a 1967 novel by Okinawan-born author Tatsuhiro Oshiro.

The protagonist is invited to a house party on a U.S. military base in Okinawa Prefecture. Upon returning home that evening, he learns that his daughter had been raped by a U.S. service member.

He asks his close American friend to help him expose the crime but is brusquely rebuffed.

Feeling like he is at the end of his rope, the man says, “I am not trying to indict one American for his crime. My accusation is directed at the cocktail party itself.”

By the “party,” I believe Oshiro implied the lives of Okinawans who are given no choice but to associate with members of the U.S. armed forces every single day.

In the novel, Oshiro delved into the mentality of occupying troops, also referring to the harm done by the Japanese military in China during the war.

“The Cocktail Party” was published more than five decades ago, but its impact remains just as powerful because none of Okinawa’s woes has been resolved.

Oshiro, one of the most influential shapers of Okinawan literature, died on Oct. 27 at age 95.

Drawing inspiration in part from Okinawa’s history and traditional culture, Oshiro penned many novels and plays.

From time to time, he made fiery observations.

Okinawa Prefecture was established when Ryukyu, originally an independent kingdom, was placed under Japan’s administration during the Meiji Era (1868-1912).

In an interview with The Asahi Shimbun in 2018, Oshiro said Japan turned Okinawa into its “military colony” through the annexation known as “Ryukyu Shobun.”

“The Japanese government’s determination to forcibly relocate a U.S. base to Henoko (within Okinawa Prefecture) represents the culmination of Ryukyu Shobun,” he said.

In “Futenma yo” (Oh, Futenma), a novel that addresses the U.S. base problem head on, Oshiro cites the old adage of “chosan boshi,” which comes from a keeper deceiving his monkeys by offering an alternative essentially no different from the original proposal.

His point is that what Tokyo and Washington are doing to Okinawans is tantamount to “fooling monkeys” by offering to close the Futenma air base in Ginowan, Okinawa Prefecture, and instead building a new base in Henoko, also in the prefecture.

Anger burned beneath his carefully modulated style of writing.

Oshiro’s works remind us that the hypocritical “party,” a result of U.S. bases being forced on locals, continues in Okinawa to this day.