Vision-impaired soccer fans get tactile system to enjoy the game 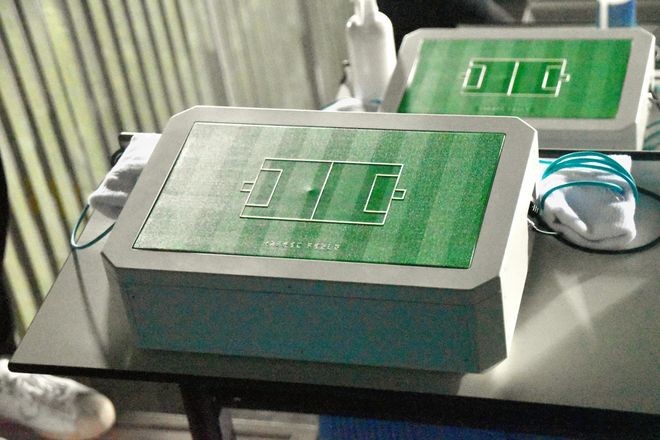 The three sat in the stands on the stadium’s fourth floor touching a box-shaped unit weighing 2 kilograms set up on a desk.

On its surface is a miniature design representing a soccer field. A bump on it moves to the movement of the ball, allowing those who feel it to identify the ball locations and follow the flow of the game.

One of the three, a woman who has had poor eyesight since birth, was thrilled to “feel” the ball approaching the goal, when a Kawasaki Frontale player scored the first goal in the first half.

“The device proved more helpful than I had expected,” said the 38-year-old woman, who is from Tokyo's Shinjuku Ward, following the session. “It is sometimes difficult for me to see where the ball is based only on the voices (of announcers).”

The woman who took part in the Oct. 18 demonstration organized by the top-tier J1 League team used a tactile system to feel the movements of the ball and the plays of the players with her fingertips and other parts.

Hailing from Shizuoka Prefecture, the female fan played soccer herself in elementary school, and was very familiar with the sport then. But with her vision weakening further, she has recently had difficulty following the ball in a match on TV.

During the game between Kawasaki Frontale and Nagoya Grampus that day, the woman and other participants tried the equipment developed by an outside organization supporting disabled athletes.

The event was the first of its kind in the J.League. Those who used the technology appeared delighted to “receive much information” on the game, and described the device as “interesting.”

On the device, the protuberance is manipulated by an operator who sends to the equipment ball position data captured and analyzed with two special cameras.

Under the system, wristbands on both arms vibrate differently, depending on the situations in the stadium such as shots on goal and throw-ins. Bands on right and left wrists represent different teams, so users can grasp the detailed situations of both teams.

The wristbands are oscillated by the operator as well while watching the game.

For the demonstration, headphones were also provided to enable participants to listen to a radio report to combine tactual and audio information.

The tactile system was developed by Para-Sports Lab, comprised of such parties as athletes and an ad agency, to help blind soccer players to understand formations and other factors more deeply. The development process started in summer 2018.

The finished device was tested at the all-Japan blind soccer championship last year and on other occasions, before it was put into operation in the latest demonstration.

“It will be nice if the method is also introduced for other sports,” said Ryo Miura, who was involved in the system’s creation.

Kawasaki Frontale decided to help the program because it has been actively engaging in activities to promote public understanding of people with disabilities. Last year, the team installed a dedicated room for children with hypersensitivity to enjoy matches in a quiet environment.

A staff member of Kawasaki Frontale touched on the possibility that the tactual assistance mechanism mighty be fully introduced.

“There still are challenges, such as how to secure personnel to operate the device to support visitors, but we will seriously consider its introduction,” the official said.