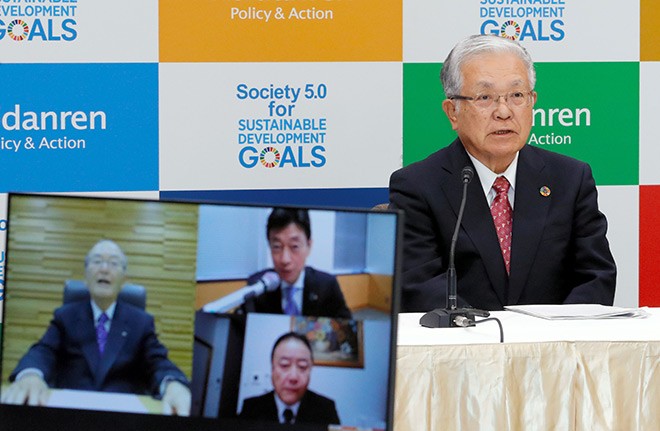 Nobuyuki Koga, right, chairman of the Board of Councillors of Keidanren (Japan Business Federation), takes part in a video conference with Yasutoshi Nishimura, the state minister for economic revitalization, on Oct. 30. (Pool)

Businesses are being asked to extend their year-end New Year holiday period so millions of people can stagger their travel and avoid congestion that the government fears could trigger a drastic spike in new coronavirus infections.

The request to business groups and local government associations was made by Yasutoshi Nishimura, the state minister for economic revitalization who is in charge of handling the health crisis.

Normally, millions of Japanese go to their hometowns at that time of year and flock to local temples and shrines over the first three days of the break.

A particular concern is that Jan. 4 falls on a Monday, which likely will prompt many companies to welcome employees back to work.

That would result in hordes of people all converging on railway lines, airlines and expressways on Jan. 3 to return home in time for their first day back on the job.

With no signs of the novel coronavirus pandemic abating, Nishimura felt that drastic measures are needed.

However, he stopped short of saying how many consecutive days off should be granted to office and factory workers, saying only that, “I want various measures to be considered, such as dividing up work or rotating the days off depending on the actual condition for each company and business sector.”

He held a video conference Oct. 30 with representatives of the three major business groups as well as the National Governors’ Association and the Japan Association of City Mayors to seek their cooperation in enforcing the policy.

The government, as part of its mission to curtail the spread of COVID-19, keeps stressing the need for the public to avoid congested conditions and poorly ventilated venues where there is a high likelihood of coming into close contact with others.

Nishimura had earlier suggested the possibility that workers could get 17 straight days off if they started their winter vacation on Dec. 26 and did not return to work until Jan. 12 since Jan. 11 is Coming-of-Age Day, a national holiday.

In contrast, Christmas is not a national holiday so under Nishimura’s original proposal that day would be the final working day of the year for many workers.

However, during the Oct. 30 video conference, Nishimura was careful to avoid stating how many days he wanted workers to take off, suggesting only that they take turns taking time off between Dec. 26 and Jan. 11.

Because the decision on days off are left up to each company and local government, it remains unclear if Nishimura’s request will have any effect.

Moreover, many small businesses simply do not have a sufficient workforce that would allow rotating days off while trying to maintain normal operations.

The education ministry has decided not to extend the winter vacation period for schools, meaning Nishimura's request might lead to differences when parents and children have days off.

It may also be difficult for some local education boards to extend the winter vacation period because they are still playing catch-up for lost class time due to the delayed start of the school year caused by the pandemic.

Essential workers, such as medical professionals and care providers for the elderly, would also likely find it difficult to spread out days off.

“The medical and elderly care sectors operate 24 hours a day, 365 days a year,” noted an official with the Japan Federation of Medical Worker’s Unions. “It is difficult to spread out days off, and it is not common practice to take consecutive days off.”

On the other hand, officials of transportation and travel companies welcomed the idea as it might encourage more people to take trips if they thought railways and airlines would be less crowded.

(This article was written by Tomohiro Yamamoto and Kazuhito Suwa.)