A range of measures were implemented at Yokohama Stadium on Oct. 30 when the attendance capacity was increased to 80 percent, but only about half of the seats were filled. (Video footage by Ryo Kato) 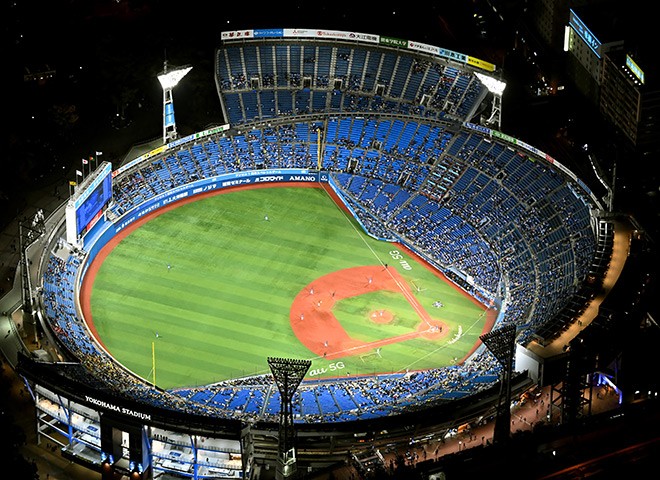 Yokohama Stadium was the site of a test for easing attendance restrictions on Oct. 30. (Kazuyoshi Sako)

YOKOHAMA--A trial run to sharply increase attendance at baseball stadiums to test the effectiveness of measures against the novel coronavirus proved to be a flop when only about 50 percent of spectators turned up for a game instead of the envisaged 80 percent.

The Oct. 30 baseball game at Yokohama Stadium between the Yokohama DeNA BayStars and Hanshin Tigers was the first of three experimental events to test steps to prevent the spread of COVID-19.

Yokohama Stadium is one of the planned venues for the Tokyo Olympics delayed until 2021 and the measures were tested for applicability next year.

Those entering the stadium were asked to install the Cocoa app that notifies users if they came in contact during the game with someone later confirmed as infected with novel coronavirus. Users also registered their seat for the game with a special app that will notify the user over the next few days if someone who sat near them comes down with COVID-19.

Fans in the stands were asked not to cheer loudly due to concerns that droplets of saliva might lead to a spread of the virus.

But when Hanshin scored the first run of the game, Tigers fans sitting in the outfield bleachers stood up and let out a roar, leading security personnel to scramble to the area to urge the fans to sit and cheer.

Tetsuya Matsumoto, a professor of infectious diseases at the International University of Health and Welfare in Narita, Chiba Prefecture, was at the game.

One of the problems he pointed out was the lines that formed at food stalls within the stadium. About 30 people were lined up in a narrow space.

While an app on the Line free messaging service informed registered smartphone users when certain areas were congested, others that were said to be open turned out to be congested, leading Matsumoto to point out that the app must be improved.

“There would be no problem if people quietly waited in line, but if they are part of a group they may tend to converse,” he said.

Vendors selling beer in the stands exchanged money with their customers. Matsumoto said vendors need to frequently disinfect their gloves to prevent a spread of infections.

But he had praise for stadium staff who approached fans not wearing face masks and asked them to do so.

Overall, Matsumoto said a more cautious test might have been advisable.

“If a cluster of infections results, people will get the impression that it is still too early (to relax restrictions on attendance at major events),” Matsumoto said.

Ninety-percent of the seats were to be made available for the Oct. 31 game and all seats for the Nov. 1 game.

(This article was compiled from reports by Shuya Iwamoto, Midori Iki, Yusuke Saito and Hajime Mikami.)