Tokyo’s Shibuya district is crowded as usual on the night of Oct. 31, but the mood is mostly uneventful and calm as the number of people in Halloween costumes is only a fraction of a normal year. (Wataru Sekita) 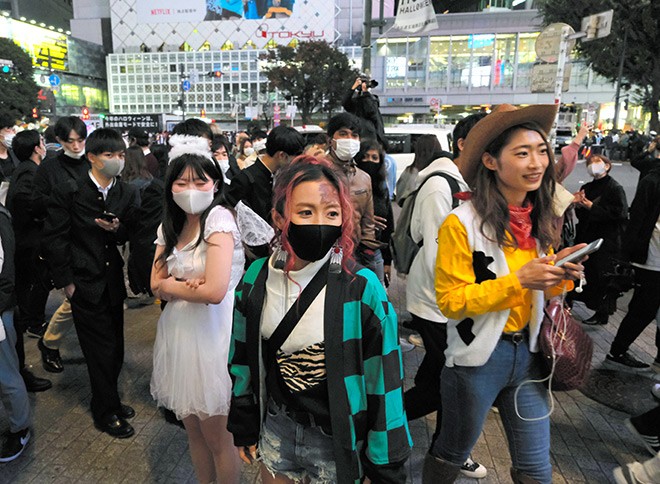 Halloween partygoers were few and far between in Tokyo's Shibuya district on Oct. 31, while costume-clad revelers eschewed health warnings and packed downtown areas in other major cities across Japan.

In Shibuya, the square in front of Shibuya Station became congested with crowds after 7 p.m. that day, a notorious gathering point for raucous Halloween celebrations.

But few people donned costumes this year, apparently heeding the Shibuya Ward mayor’s plea for not visiting the area for Halloween as the capital battles the pandemic.

A 16-year-old female high school student from Saitama Prefecture sporting the costume of a “yokai” Japanese folk monster was one of only a handful visitors who dressed up for the occasion.

“I do not pay much attention to the pandemic,” said the girl, who came with a friend. “Today is Halloween, and I wanted to dress up in a costume.”

Police officers, as well as private security guards, called out to throngs of pedestrians not to spill over into the roads and keep moving.

“I get the impression that well under 10 percent of the people are wearing a costume this year compared with last year,” said one of the ward office employees on site to monitor the situation.

Around the same time in Osaka, the Dotonbori district was packed with onlookers and crowds showing off their Halloween attire.

This year, many paraded around dressed as characters from “Demon Slayer,” whose anime is currently breaking theater box office records. The carefree revelers posed for pictures with one another.

In Nagoya, temporary restrictions were imposed on entry to some parts of the city center as it was jam-packed with visitors in costumes.

Fukuoka also saw large crowds of people in disguise showing up in the city’s Tenjin shopping and entertainment district, swelling to the extent that made it difficult for passers-by to get through.

Many of the partygoers sang and shouted loudly despite city authorities request in advance that residents enjoy Halloween while taking precautions against the virus.