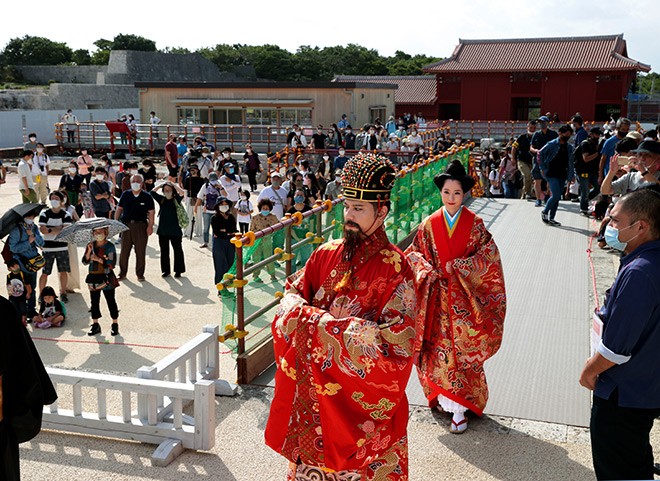 A man and woman dressed up as the king and queen of the Ryukyu Kingdom make an appearance during the Shuri-jo castle festival in Naha on Oct. 31. (Minako Yoshimoto)

NAHA--On the one-year anniversary of the inferno that destroyed Shuri-jo castle here, visitors to the site got a sobering glimpse of the damage and hope for its rise from the ashes.

A room featuring a slew of artifacts damaged in the blaze and showcasing the technology to reconstruct the castle opened on Oct. 31, as tourists joined locals in prayers for restoring this treasured piece of Okinawa's legacy.

A four-day Shuri-jo castle festival began that day, offering an appearance by a man and a woman dressed up as the king and queen of the Ryukyu Kingdom, which the prefecture was known before it was annexed to Japan. The annual festival will also offer performances of Ryukyu dance and ancient Ryukyu music.

By the festival's start, debris from the fallen main hall and other buildings of the castle, the most prominent symbol of the southernmost prefecture’s unique culture and tradition, had been cleared from the site.

Restrictions on entry to the castle premises had been also lifted to pave the way for a new chapter in the reconstruction project.

The central government plans to finish the basic design of the main hall by the end of March. The work to reconstruct the main hall is expected to start in 2022, the 50-year anniversary of Okinawa’s reversion to Japan, and to be completed in 2026.

In the fire that stunned and saddened the nation, which started in the early morning hours, the castle’s main hall and five other main buildings spanning an area of about 4,000 square meters were destroyed.

Okinawa prefectural police and Naha’s fire department were unable to definitively determine the cause of the fire in their investigation, which wrapped up in March.

The castle had a collection of 1,510 fine arts and crafts. As of Oct. 30, 391 articles in its possession, including “Secchu Kacho-zu” (bird in the snow), a picture that had been passed down to the kingdom’s ruling Sho family, were confirmed to be destroyed.

The Okinawa prefectural government and related entities have received about 5.1 billion yen ($48.57 million) in donations from people in and outside of Japan for the reconstruction effort.