Graffiti artists work on a mural in Futaba, Fukushima Prefecture, which was transformed into a ghost town by the disaster at the Fukushima No. 1 nuclear power plant in March 2011. (Sayuri Ide) 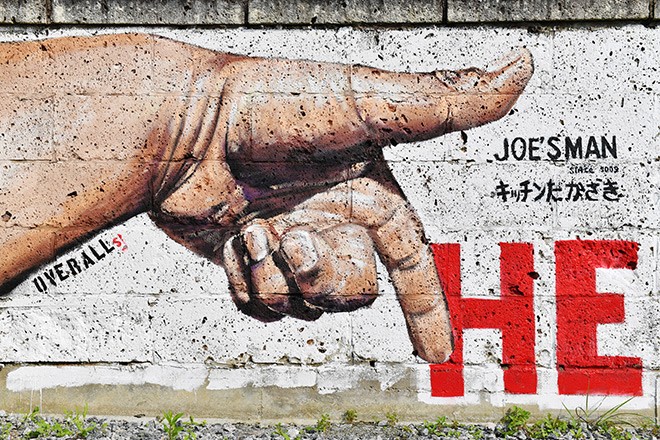 A large index finger points at the word "Here" in "Here We Go!!!," the first work of the Futaba wall art project, in Futaba, Fukushima Prefecture. (Sayuri Ide)

FUTABA, Fukushima Prefecture--A large hand-painted image on a wall in a vacant lot jumps out at visitors exiting a train station in Futaba, which was transformed into a ghost town after 2011 triple meltdown at the Fukushima No. 1 nuclear power plant.

The striking graffiti art boasts an index finger pointing at the first word of a slogan, "Here We Go!!!," in front of the east exit of JR Futaba Station as if to say the town is ready to make a fresh start.

While almost all of the town is still designated as off-limits due to high radiation levels, evacuation orders were lifted for some areas this past spring, including around the new station, allowing people to visit without a permit.

Inspiration for the hand graffiti came from Jo Takasaki, who evacuated to Tokyo after the nuclear disaster. His hand was used for the image.

Takasaki, 39, learned last year about a project that transformed a disused shipyard in Amsterdam into a gathering site with the help of art. He imagined it would be a great way to revitalize Futaba, which seems frozen in time.

In June 2019, a fortuitous thing happened at the “izakaya” pub he runs in Tokyo's Sangenjaya district.

One of the patrons at the counter of his Joe's Man Nigo happened to be Takato Akazawa, president of OVER ALLs Co., a mural production company whose creations include designs at three Starbucks stores in Tokyo and Yokohama.

OVER ALLs was founded in 2016 by Akazawa, 38, who is in charge of planning, and Yuki Yamamoto, 40, a painter responsible for production.

Akazawa was talking with an acquaintance about how a run-down section in Los Angeles was transformed into a showcase of murals. He also talked enthusiastically about his dream of revitalizing local communities in Japan through art.

Akazawa initially said he was happy to oblige, but deep down felt queasy about being a total stranger and going to work in the town deeply affected by the nuclear disaster.

Takasaki messaged him asking for the favor the following day. Moved by his enthusiasm, Akazawa had a change of heart and headed to Futaba in August to see what things were like there.

As a starter, Akazawa decided to paint a graffiti piece themed on a Shakespearean tragedy.

It depicts Romeo in a protective suit reaching out for Juliet standing on a "balcony" represented by a bar chart of radiation doses, suggesting they can clasp each other's hand after radiation levels drop.

As they drove closer to Futaba, Akazawa came across scenes that he had only seen on TV: streams of trucks loaded with decontaminated soil passing by, signs on streets declaring "difficult-to-return zone," gates to restrict access and land plots overgrown with vegetation.

Akazawa's attention was drawn to a low wall in a vacant lot in front of JR Futaba Station, where Takasaki's family home, which also served as a restaurant managed by his father, once stood.

It had remained long-forgotten because it was concealed by buildings before the nuclear accident.

Akazawa decided to use the wall as a canvas.

He and his partner finished the Romeo and Juliet-themed graffiti elsewhere before heading back to Tokyo that day and returned to Futaba two days later to work on the "Here We Go!!!" mural on the wall facing the station.

After giving the idea much thought, Akazawa decided to go for the design to reflect Takasaki's determination that Futaba is "our place."

"Art is a beacon. It has the power to bring people together," Akazawa said. "But it is townspeople who play central roles."

He added that the phrase also means they are making a fresh start.

"I want to lead the rebuilding of the town. We lost so much in the nuclear disaster," Takasaki said. "But if we can rebuild it as an art town, we can change perceptions of the past. It would be great if we can say, 'I'm from Futaba, which is made great with art.'

With support from residents gradually growing, a new mural was finished in October.

It is a painting of Takako Yoshida, 75, who ran a fast food restaurant called Penguin that was popular among junior and senior high school students.

Illuminated by the morning glow, she is seen looking through the hole of a doughnut, a popular food item served at Penguin.

After the nuclear accident, 96 percent of the land in Futaba, one of the two towns that co-host the stricken Fukushima No. 1 plant, was designated as a "difficult-to-return zone" because of high radiation levels.

In March, the government lifted evacuation orders for areas around JR Futaba Station spanning about just 0.2 square kilometer in the no-entry zones.

Evacuation orders for areas with relatively low radiation levels, designated as "zones in preparation for lifting the evacuation order" (about 2.2 square kilometers), were also lifted.

Evacuation orders for locations considered a priority area for decontamination work, construction of infrastructure and rebuilding are expected to be lifted as early as spring 2022 to allow residents to start living there.

Futaba officials hope to welcome back 2,000 evacuees by 2027. The town had a population of nearly 7,000 prior to the disaster.

A survey by the town office last fall found that 10.5 percent of 1,402 households that responded wanted to return home.