Virus tests at border waived for 11 countries and regions 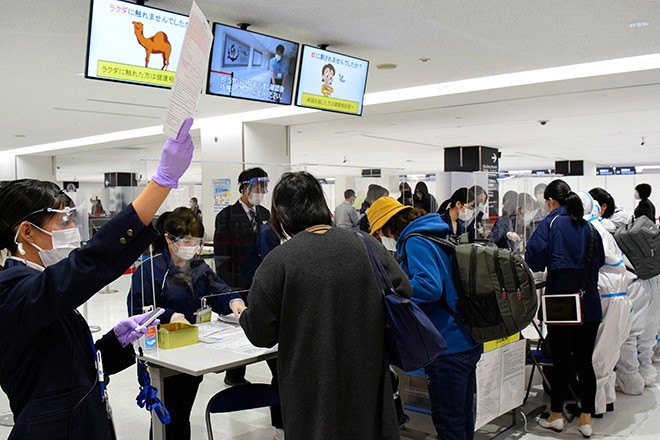 Passengers check in at the counter that screens entrants for those who need the virus test and those who do not at Narita Airport on Nov. 1. (Yoshifumi Fukuda)

The government ended on Nov. 1 its requirement for visitors from 11 countries and regions, including Taiwan, China and South Korea, to get tested for the novel coronavirus at airports upon entry to Japan.

It is the first such step the government has made in relaxing its testing restrictions at the border since the pandemic began.

The testing requirements were waived after the alert level was lowered for infections in those countries and regions on Oct. 30, as their case trajectories have plateaued.

However, those travelers still must self-isolate for two weeks from the following day after they enter Japan and they must refrain from using the public transportation system. They will also need to submit a form to authorities that states where they will stay during their visit to the country.

The service primarily targets business travelers who need to present their destination countries with a certificate that states they were not infected with the coronavirus.

The polymerase chain reaction (PCR) test centers at Terminal 1 and Terminal 2 at the airport will conduct the tests through using nasal swabs and collecting saliva samples.

For the first few weeks, it is expected to take five to six hours to complete the testing procedures, from a person being accepted for examination to issuing them a certificate. That is because customers’ samples will be taken to a lab outside the airport for diagnosis.

But the university will set up a lab in the airport later this month, which will cut the time down to two hours.

Testing and producing a certificate costs 39,800 yen ($379) for those who make a reservation. The charge is 46,500 yen for people who do not make a reservation and who seek to use the service at night or during the early morning.