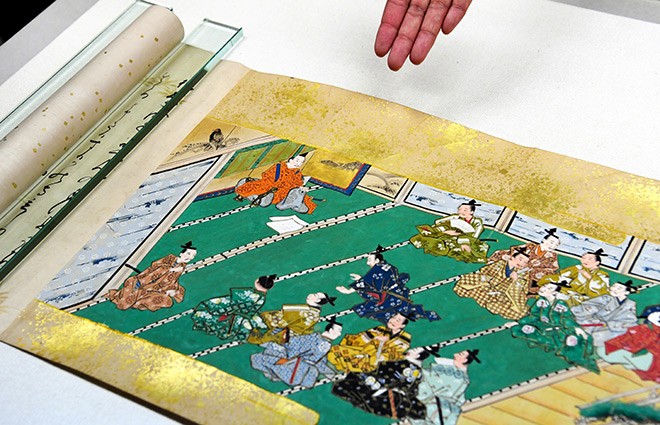 KYOTO—“Jokyu-ki Emaki,” the only known set of picture scrolls depicting the rebellion fought in the Kamakura Period (1185-1333), was found about 80 years after it went missing, the Museum of Kyoto said.

The set of six well-preserved scrolls, believed to have been produced in the Edo Period (1603-1867), was found in a private home.

The rebellion, known as the Jokyu Incident, was led by Retired Emperor Go-Toba against Hojo Yoshitoki, the regent of the Kamakura Shogunate, in 1221, the third year of Jokyu.

Go-Toba’s forces lost the battle, and he was banished to the Oki Islands in present-day Shimane Prefecture. The victorious shogunate later set up the post of Rokuhara Tandai in Kyoto to strengthen surveillance on the Imperial Court and control western Japan.

Featuring text from the “Jokyu-ki” war tale, the picture scrolls depict the Jokyu Incident in 36 scenes. One shows feudal warriors gathering in front of Yoshitoki, while another depicts Go-Toba’s forces losing the battle at the Ujigawa river.

Warriors with various facial expressions are vividly portrayed, while the illustrations retain their vibrant colors.

The scrolls show the face of Yoshitoki. No other portraits of the regent have been found.

“We are pleased to find what is believed to be the only existing picture scrolls ahead of the 800th anniversary of the incident next year. We feel a strange twist of fate,” said Yoshitomo Nagamura, a curator at the museum specializing in Japan’s medieval times. “It is also a highly valuable piece for research purposes.”

Each scroll measures about 15 meters long and about 50 centimeters high.

Judging from the paper quality and other conditions, the scrolls are believed to have been made in the early Edo Period, the curator added.

The scrolls had originally been housed at Ryukoin temple in Koya, Wakayama Prefecture. The set was lost after it was put on display at the predecessor of the Kyoto National Museum in 1939.

In January this year, Nagamura found the scrolls in a private home. Based on the box inscription and the content, he identified them as the same picture scrolls from Ryukoin.

The scrolls will be shown at a special exhibition at the Museum of Kyoto from April 6 to May 23.