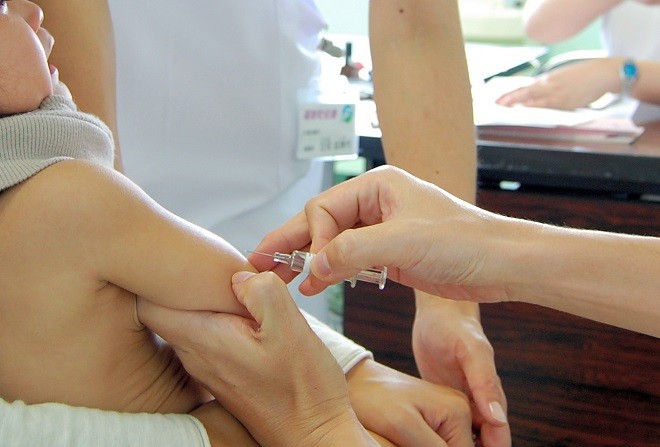 "Meccha" denoted a pockmark or boil in an old dialect of Fukui Prefecture. When smallpox raged during the late Edo Period (1603-1867), the scars left on patients' faces were called "meccha."
Ryosaku Kasahara (1809-1880), a local general practitioner, was referred to by the derisive moniker of "meccha ishi" (pockmark doctor).

Kasahara devoted his life to the popularization of a smallpox vaccine and is portrayed in detail in the novel "Yuki no Hana" (Snow flower) by Akira Yoshimura (1927-2006).

"Back then, even doctors in the service of the "han" feudal domain had little understanding of the smallpox vaccine derived from cowpox," noted Fumiko Yanagisawa, 62, a staffer at the Fukui Prefectural Archives who has thoroughly researched Kasahara's letters. "Slandered as a practitioner of dubious Western medicine, Kasahara kept moping over it."

When Kasahara finally fulfilled his quest of obtaining a smallpox vaccine in Kyoto in the winter of 1849, he had no means of transporting it to Fukui.

The method he eventually devised was to inoculate a toddler with the vaccine, transplant the pus the child developed to another child, and repeat the process in an "inoculation relay" that involved more than a dozen youngsters and their parents, who trekked across mountain ridges in snowstorms all the way to Fukui.

But the vaccine did not catch on, and Kasahara ran up a massive debt.

"His work was finally recognized when a smallpox epidemic struck three years later and people became convinced that the vaccine could save their children," Yanagisawa said.

This prompted the domain's authorities to start full-scale administration of the vaccine at inoculation centers.

Kasahara and his team named the vaccine "hakushin," assigning kanji for "white" and "god." This homonym was close enough, but more to the point, the curative power of the vaccine must have felt almost divine.

Actually, now that the entire world is waiting anxiously for the completion of a COVID-19 vaccine, the "white god" imagery doesn't seem exaggerated at all.

I climbed Mount Asuwa that overlooks the Fukui Plain. At the summit stands a monument honoring Kasahara, inscribed with these words:

"He drove away the epidemic and nurtured babies."

I was relieved to see Kasahara's name etched in recognition of his feat as a public health pioneer.