Kurds struggle to make ends meet in ‘Warabistan’ due to pandemic 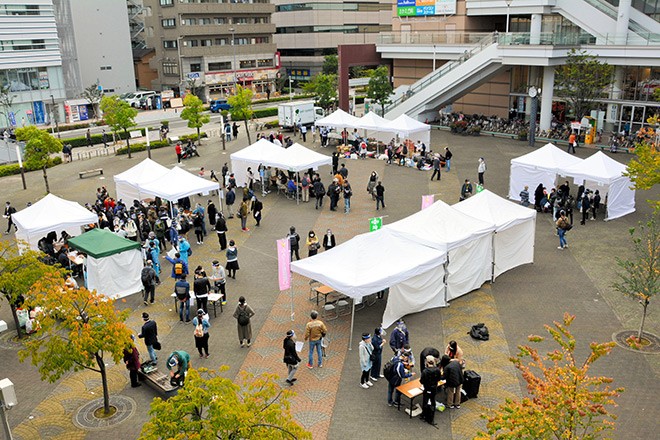 Support groups set up a “tent village” in front of JR Kawaguchi Station in Kawaguchi, Saitama Prefecture, on Nov. 1 to help Kurds struggling economically due to the COVID-19 crisis. (Kyota Tsutsumi)

A “tent village” set up by support groups to distribute free food and clothes, as well as consultation services, drew long lines of Kurds in the square in front of JR Kawaguchi Station here on Nov. 1.

Approximately 2,500 Kurdish people who fled their countries for fear of persecution and discrimination currently live in Japan.

Roughly 2,000, or 80 percent, of them settled in Kawaguchi and the neighboring city of Warabi. Their presence has earned the cities and surrounding area the nickname Warabistan from locals.

More than 700 of them are in the process of applying for asylum.

Those who have overstayed visas and are on provisional release do not have a valid residence card, making it difficult for them to find work, or to receive welfare public assistance and medical support.

They have survived by helping each other.

But the pandemic has deprived them of job opportunities. They also did not qualify to receive the 100,000-yen ($950) stimulus handout from the central government to most residents in Japan.

Their lives are now on the brink of collapse, supporters say.

A 19-year-old man said he came to Japan with five other family members. His father made a living by stacking blocks but lost his job after the pandemic flared.

He said it has been difficult for the family to pay rent and buy food.

“I have younger brothers but I can’t find a job,” he said.

The man said he does not have health insurance and owes about 90,000 yen to a hospital.

“I can’t afford to even catch a cold, much less the coronavirus,” he said.

Unable to sit by and watch the situation continue, several support groups for Kurds in Japan, lawyers and anti-poverty activists have rushed in, establishing an “executive committee to protect the Kurdish people’s right to exist.”

Committee members set up 14 tents in the square at JR Kawaguchi Station to help them.

For local Kurds, issues like education are secondary, said Hidenobu Matsuzawa, who co-chairs the committee.

“They have no money for that. They face more pressing issues such as being unable to pay medical fees,” he said.

The committee plans to follow up with the people who showed up at the tent village event by offering more support.