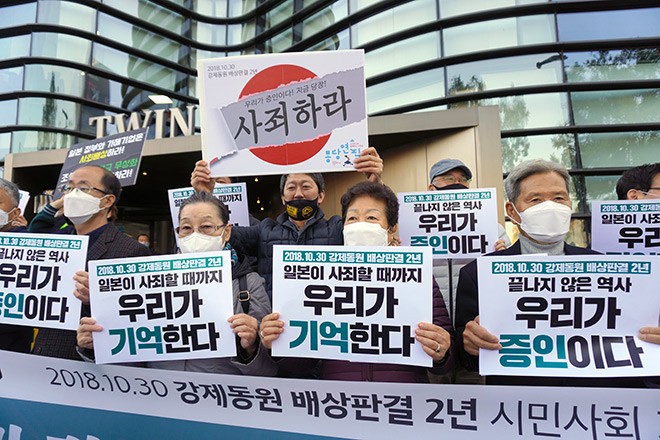 Supporters of former wartime laborers who filed a lawsuit against Japanese companies hold a rally in front of the Japanese Embassy in Seoul on Oct. 30, the second anniversary of the South Korean Supreme Court ruling that ordered compensation be paid. (Takuya Suzuki)

An end to the legal and diplomatic dispute between Tokyo and Seoul is nowhere in sight, two years after the South Korean Supreme Court ordered Japanese companies to pay compensation to wartime laborers.

South Korean officials had expected Prime Minister Yoshihide Suga to take a more lenient stance by emphasizing closer economic ties and moving away from the hard-line position of his predecessor, Shinzo Abe.

However, Japan rejected an informal proposal from Seoul that the South Korean government would reimburse the Japanese companies at a later date if they agreed to pay the entire compensation amount.

Japanese officials feared that accepting the proposal would lead to more lawsuits against Japanese companies that used Korean workers during the colonial rule over the Korean Peninsula between 1910 and 1945.

Japan’s position has long been that the 1965 bilateral agreement settled all compensation claims by South Korea from World War II.

According to sources in the Japanese and South Korean governments, the South Korean president’s office this year set up a team led by Noh Young-min, the president’s chief of staff, to consider various measures to resolve the wartime laborers’ issue as a way to improve bilateral ties.

Although South Korean President Moon Jae-in has long insisted that the Supreme Court ruling must be respected, he did give the go-ahead for the proposals that were put together.

In spring, South Korea proposed to reimburse the Japanese companies later if they agreed to pay the compensation amount in line with the Supreme Court ruling.

Japanese officials believed that accepting the offer would essentially be agreeing with the court orders.

After both companies refused to follow the top court’s orders, South Korean courts started procedures to seize the assets of the two companies in South Korea, such as stocks and patents, and sell them for cash to cover the compensation.

Regarding the move to sell off the seized assets, Foreign Minister Toshimitsu Motegi has said, “That would lead to a very serious situation.”

In August, when he was still chief Cabinet secretary, Suga said that every measure would be considered if South Korea went ahead and sold off the assets.

Conservative elements within the ruling Liberal Democratic Party considered even more drastic measures, such as restricting direct investment in South Korea and seizing assets held in Japan by South Korean companies, according to sources.

However, sources said that since Suga took over as prime minister he has instructed officials to consider more moderate measures to somehow improve the bilateral relationship.

That stance led Nam Gwan-pyo, the South Korean ambassador to Japan, to report to the South Korean National Assembly on Oct. 21 that Suga was taking a more realistic approach that had contributed to a more positive atmosphere.

On the same day, Lee Nak-yeon, the head of the ruling Democratic Party of Korea, said at a news conference, “I hope the issue can be resolved before the Tokyo Olympics next summer.”

The Moon administration, which cannot interfere with the judicial process, also knows that selling the assets of the Japanese companies would further worsen ties with Japan.

The novel coronavirus pandemic has also had a deep negative impact on the South Korean economy, and Seoul cannot ignore the effects from stricter export restrictions imposed by Tokyo in retaliation for the South Korean Supreme Court rulings.

In an attempt to resolve the thorny issue, various channels are being explored, including the one between Shigeru Kitamura, the head of the National Security Secretariat, and Suh Hoon, Moon’s national security adviser.

Kitamura and Hoon worked together on the issue of Japanese nationals abducted by North Korea in their respective past positions.

(This article was written by Takuya Suzuki in Seoul and Ryutaro Abe and Yuki Nikaido in Tokyo.)