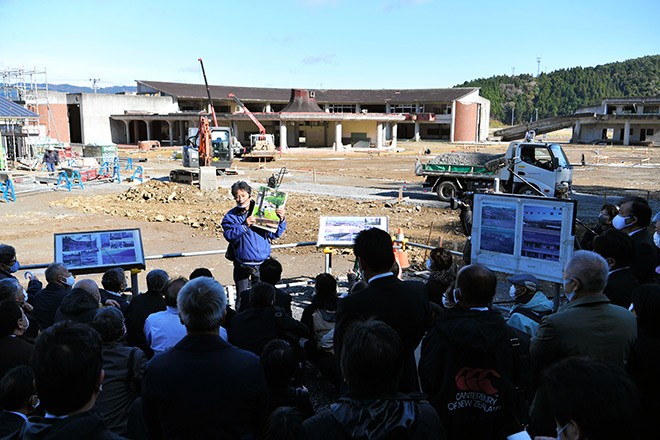 ISHINOMAKI, Miyagi Prefecture--It was job training like no other for newly appointed school principals in this city devastated by the March 2011 Great East Japan Earthquake and tsunami.

Meeting with family members who lost their children in the disaster to hear their heartbreaking first-hand accounts and touring the grounds of a school hit by the tsunami was top of the list on Nov. 4.

About 90 recently appointed school principals in the prefecture visited the former Okawa Elementary School in the coastal area of Ishinomaki as part of the prefectural education board’s training program on the day.

Eighty-four children, teachers and staff members lost their lives while waiting to evacuate in the school grounds on March 11, 2011.

Two bereaved family members guided the group of principals around the ruins of the school grounds, relating what the children went through on the fateful day and how they have dealt with losing their loved ones.

“There is no teacher who doesn’t want to save children’s lives, but they couldn’t save the lives they wanted to save,” Toshiro Sato, 57, who lost his second daughter, told the principals during the tour.

“By facing up to the reality, we can pave the way for the future. I want you to start by facing life with respect,” he said.

The school, which has become a symbol of the disaster, has welcomed numerous educators and visitors on training programs. But it was the first time for the prefectural education board to send teachers there.

Some family members of the children who died at the school sued the prefectural and city governments.

The governments lost the lawsuit and the ruling was finalized in October 2019, contributing to the board's decision to allow the current tours.