Survey: 20% still feel depressed one year after death in family 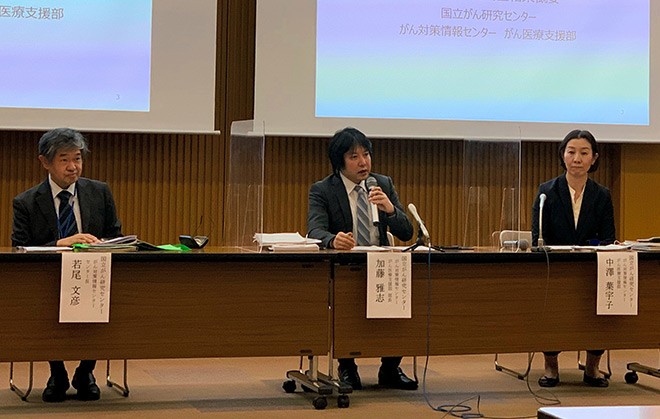 Masashi Kato, center, chief of the National Cancer Center’s Division of Medical Support and Partnership, explains about the survey of bereaved families in Tokyo on Oct. 30. (Ayako Tsukidate)

Nearly 20 percent of bereaved families show signs of depression even one year or more after the deaths of loved ones due to illness, according to a survey.

The National Cancer Center, commissioned by the government, conducted the first large-scale study of its kind and also discovered that 20 to 30 percent of bereaved families continue suffering deep sorrow.

“More hospitals have started accepting outpatients who have lost a family member, but the number is still not enough,” said Masashi Kato, chief of the center’s Division of Medical Support and Partnership. “It cannot be said that medical institutions are offering sufficient assistance for families after patients perish.”

As the findings also show that 40 to 50 percent find it a burden to care for sick family members, a support mechanism is needed for families while patients are battling diseases and following their deaths.

Covering 50,000 bereaved family members of those who died in 2017 due to cancer, heart disorders, cerebrovascular diseases, pneumonia and renal failure, the survey asked about families’ psychological burdens and patients’ lives in questionnaires between January and March 2019. Valid responses came from 21,000 of them.

According to the results, 12 to 19 percent displayed strong signs of depression, such as not feeling like doing anything following their families’ deaths, that affects other aspects of their life, compared with 3 to 10 percent of the public who develop those conditions.

The percentages differed depending on the cause of death.

The survey also showed 18 to 30 percent continue holding deep sorrow, forcing them to feel emotional pain or to be suddenly stricken by a sense of sadness when thinking of the deceased.

The findings underline the serious mental impact caused by the loss of loved ones. Given that the study was conducted at least one year after their family members passed away, the families’ feeling of loss appears to linger for prolonged periods.

The ratios of those feeling depression and grief were both highest among families of cancer patients.

Asked about looking after their patients, 41 to 51 percent of the bereaved families said they were very exhausted in their care.

In its anti-cancer policy, the government notes more services should be introduced to ease patients’ suffering and also provide families with care before and after the patients die.

Hiromi Todoroki, who helped her late husband combat a disease and serves as chair of Kibo no Kai (Bring Ray of Hope), a group of patients and their families, stressed the importance of mental care.

“Families of a patient are called ‘second patients,’ ” said Todoroki. “Close involvement of health care providers is needed in mental care and life support for families even while the patients’ treatment continues.”