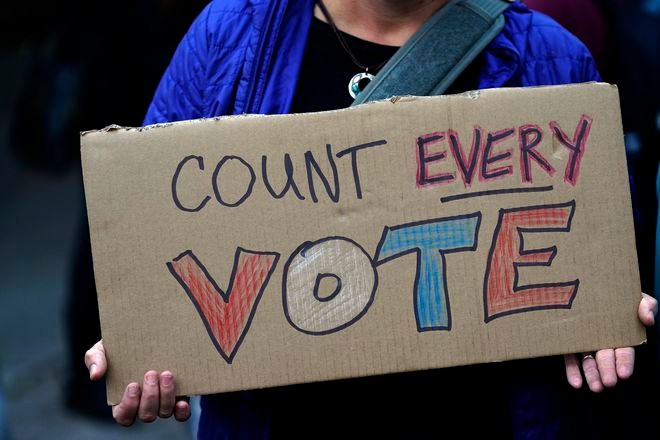 A person holds a sign while listening to speakers outside of Revolution Hall before marching on Nov. 4 in Portland, Oregon, following voting in the U.S. presidential election. (AP Photo)

The predominance of Christianity and the vastness of the land were the primary reasons for why every Election Day in the United States came to be held on a Tuesday.

Back then, people went to church on Sunday, spent Monday traveling in their horse-drawn buggies to the polls, voted on Tuesday and then returned home to resume their daily lives.

Voters expended time and energy to fulfill their duties as sovereign citizens.

Also conspicuous was the sheer volume of early mail-in ballots, which had mainly to do with people's fear of contracting COVID-19 at the polls. But it was also striking because some states had only limited facilities for collecting mail-in ballots.

Watching footage of long lines of cars with people waiting to drop off their ballots, I was filled with respect for their patience.

"Divide" has become a keyword in U.S. politics today, and it certainly showed in how people voted this time.

Those who opted to vote by mail were said to be predominantly Democratic Party supporters. One U.S. media comment went to the effect, "Democrats vote early, Republicans vote later. It is as if this nation has two voting systems."

This election cannot be decided until more mailed-in ballots have been counted. Yet, President Donald Trump has already claimed victory, threatening to even go to court to stop any further vote counting.

Is there any other world leader who disrespects their own nation's election system as blatantly as Trump does?

A 1960 opinion poll asked this question: "How would you feel if your child married a supporter of a different party?" Only less than 5 percent of pollees said "Disappointed."

But in a 2010 survey, that was the response of 33 percent of Democrats and a whopping 49 percent of Republicans, according to "How Democracies Die" by Steven Levitsky and Daniel Ziblatt.

Race, faith and region form the background of the divide, and the rift is deepening.

It is as if the United States of America today is made up of two entirely different countries. And the whole world, including Japan, is on pins and needles until it becomes clear which of these two Americas has won the 2020 contest.

In vain, I wish I could vote by mail.