EDITORIAL: Governments must explain why SpaceJet is now grounded 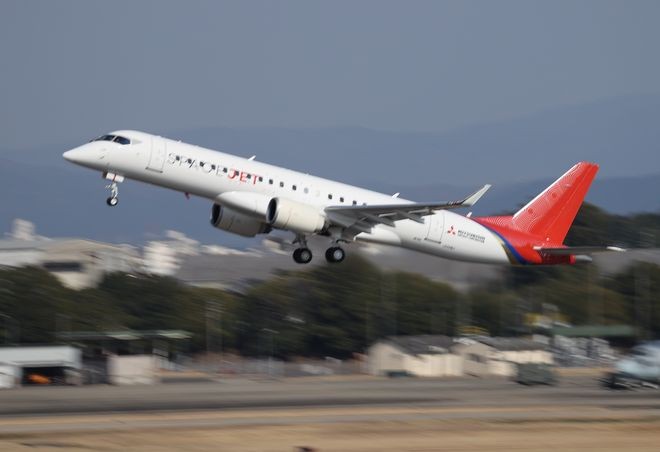 The SpaceJet aircraft takes off during a flight test on March 18 in Aichi Prefecture. (Asahi Shimbun file photo)

The company will scale back its budget for the aircraft development project for the next three fiscal years to 20 billion yen ($191.7 million), one-20th the amount it has spent on the undertaking in the past three years.

While the manufacturer says it will continue producing documents needed to receive the “type certificate” required to operate the aircraft commercially, it will suspend test flights, a crucial part of the aircraft development process.

This means the MHI will be unable to deliver the first SpaceJet in fiscal 2021, as scheduled. But the company says it will not set any new target for the first delivery.

The first project to develop domestically made passenger aircraft in half a century since the development of the YS-11, a turboprop airline that was Japan’s first mass-produced passenger plane built after World War II, is now at the brink of falling through.

With demand for air travel evaporating amid the new coronavirus pandemic, none of the embattled airline companies around the world can afford to buy any new passenger jet, at least for the time being.

MHI says it will decide on whether to restart the costly project after evaluating the long-term outlook of the aircraft market, which it believes will start recovering in fiscal 2024 or later.

But it is far from clear whether the end of the pandemic will ensure a profitable future for the SpaceJet.

Profit margins on such small-size aircraft are generally thin in the first place. Even before COVID-19 began to spread across the globe, some of the MHI’s competitors sold off their small jet businesses.

Moreover, the growing global trend toward working from home has cast a pall over the outlook of the aircraft industry.

To make things worse, the SpaceJet project has suffered major strategic setbacks due to a series of delays.

When the project was put into full gear in 2008, the company planned to start delivering the aircraft in 2013. But the first delivery has been postponed as many as six times due to design changes and other factors.

While the SpaceJet, formerly known as the Mitsubishi Regional Jet, was struggling to take off, one of its rivals, Embraer, a Brazilian aircraft maker, started delivering new small passenger jets equipped with the same U.S.-made state-of-the-art engines.

The MHI failed to pull off its plan to steal a march on rivals in bringing a new fuel-efficient jetliner to the market.

One key factor behind the delays in the project is the company’s overconfidence in its technological prowess, which served as a disincentive to seek expertise from others.

If it really reopens the project in the future, the firm will have to overhaul its strategy and organization to tackle related challenges.

MHI has shelled out more than 700 billion yen on this effort. Even if it turns out difficult to revive the project, the company will face the challenge of figuring out ways to use what it has learned in the project for other businesses. This will test its ingenuity.

Manufacturing aircraft, which is composed of some 1 million parts, requires the cooperation of many suppliers. Some makers of aircraft components decided on participation to ensure they could supply sufficient parts for the SpaceJet when mass production started.

The MHI should have sincere talks with such partners over how the losses should be shared.

As Japanese makers of such electronics products as TVs and computer chips have lost international competitiveness, the government has provided 50 billion yen in tax funding to support basic research for the SpaceJet to foster a new mainstay manufacturing industry following the auto industry.

Some local governments in Aichi Prefecture, the principal hub of the Japanese aircraft industry, have provided their own policy support for the ill-fated project.

Now that the tax-supported project has been put on ice, the national and local governments involved need to offer detailed explanations about why and how it has gone awry.