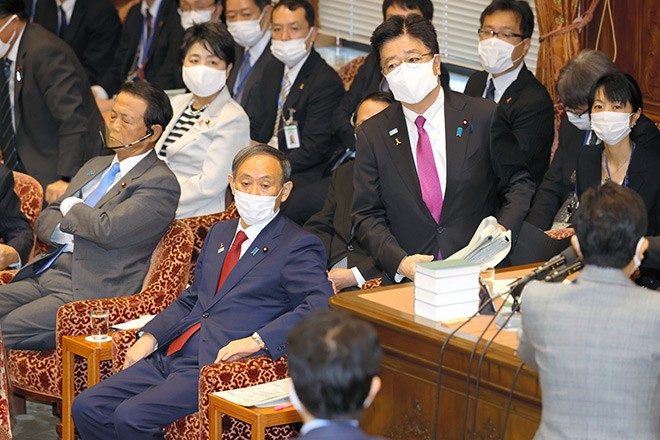 Government officials provided another explanation for Prime Minister Yoshihide Suga’s refusal to appoint six recommended scholars to the Science Council of Japan, but their words only fueled confusion and criticism from opposition lawmakers.

At the Nov. 4 Lower House Budget Committee session, Chief Cabinet Secretary Katsunobu Kato acknowledged that the prime minister had no legal authority to simply choose as he desired the 105 new council members who are appointed every three years to six-year terms.

The law governing the Science Council states that the prime minister makes the appointments based on recommendations from the council. And Kato said that respecting the recommendations was important.

“But appointments do not have to be made according to the recommendations if the prime minister feels he cannot fulfill the responsibility he has toward the Diet and public,” he said.

Yukio Edano, the head of the opposition Constitutional Democratic Party of Japan (CDP), then asked Suga if he had approved the six scholars, would that make him feel he was not fulfilling his responsibility.

Suga responded, “I would like to refrain from responding because as with all civil servants the reason for appointing specific individuals is not divulged.”

Two days earlier in the Lower House Budget Committee, Kato said the personnel decision came after the objectives for establishing the Science Council were considered.

CDP member Seiji Osaka read off the three objectives written in law, such as “improving and advancing science.”

He asked if the six were rejected because those objectives would not be reached. A clear answer was not given.

Government officials have come up with various reasons for why Suga did not appoint all the recommended scholars, who had all previously criticized government policies.

At first, the officials said Suga’s decision was based on “a comprehensive perspective while looking at the big picture.”

But even ruling coalition lawmakers said they had no idea what that meant.

A later explanation was that ensuring diversity in the Science Council was important. Suga had claimed there was a bias toward appointing scholars from national universities.

However, that rationale was rejected by opposition lawmakers because the six rejected scholars included a woman and academics affiliated with private universities.

Hiranao Honda, another CDP lawmaker, said the prime minister should stop using the excuse that he cannot comment on personnel matters. Honda noted that Suga, in his own book, provided a detained description about the demotion of a bureaucrat in the Ministry of Internal Affairs and Communications.

Despite the lack of answers from Suga, opposition lawmakers for the first time got him to explain who first told him the six scholars were being rejected.

Kiyomi Tsujimoto of the CDP also pointed out that Yoko Kato, a history professor at the University of Tokyo who was one of the six rejected, serves on a government panel.

Suga admitted that he was not aware of that fact.

When Tsujimoto asked Suga if that lack of awareness showed that he was unqualified to decide on appointments to the council, Suga only said, “That is something all of you have to think about rather than for me to answer.”