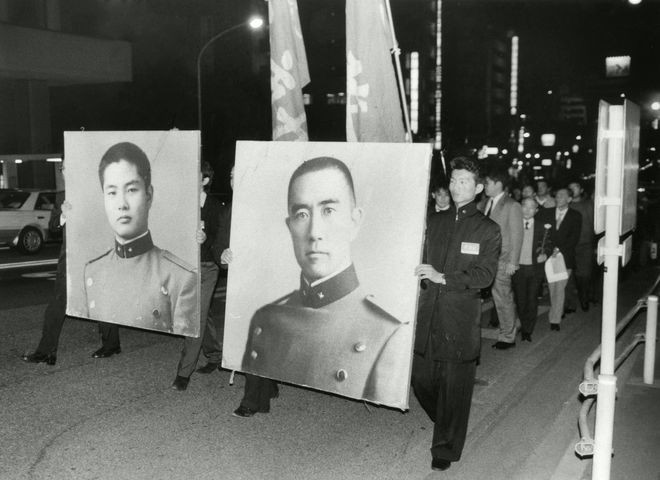 Photos of Yukio Mishima, right, and Masakatsu Morita are shown in a memorial march along Tokyo’s Yasukuni-dori street on Nov. 25, 1971, to commemorate the first anniversary of the Mishima incident. (Asahi Shimbun file photo)

YOKKAICHI, Mie Prefecture—Osamu Morita’s search for answers started 50 years ago when a phone call informed him that his younger brother had died.

His shock and confusion were exacerbated after he learned that his sibling’s death was part of an incident that stunned the world.

His brother, Masakatsu Morita, was one of two men who committed “seppuku” (ritual self-disembowelment) at a Ground Self-Defense Force facility in Tokyo on Nov. 25, 1970. The other individual was literary giant Yukio Mishima.

Osamu, now a 91-year-old resident of Yokkaichi, is still searching for meaning behind his brother’s death in the Mishima incident.

The brothers’ ideologies were polar opposites. In Osamu’s career in politics, he had been a staunch defender of pacifist Article 9 of the Constitution.

Their differences have raised questions from those familiar with Masakatsu’s death.

“Your brother was a right-winger, and you are a left-winger, right?” Osamu quoted someone as saying to him.

But he dismissed the remark as being off the mark.

“It’s not about right or left,” Osamu said. “A basic stance of my brother was about taking action for Japan and its people. I believe that has something in common with my own view of life.”

Masakatsu, who was a student with Waseda University in Tokyo, was visiting his family home in Yokkaichi in central Japan for the summer holidays in August 1970 when he abruptly left.

“I am leaving early because I am going to where Mr. Mishima is,” he said.

It was the last time Osamu saw his younger brother alive.

Months later, Osamu was working at a junior high school when he received the call from a friend of his younger brother.

“Masakatsu is dead,” the friend said.

Osamu was also told that Masakatsu was seen on TV accompanying Mishima.

Still in confusion, Osamu rushed to the nearby Yokkaichi Minami Police Station and left for Tokyo after the prefectural police headquarters confirmed Masakatsu’s death.

The following day, Osamu was taken to Keio University Hospital, where his brother’s body was kept.

Masakatsu was the youngest of five siblings. He was 2 years old when his father died of an illness, and his mother died soon thereafter. Osamu, who was 16 years his senior, acted as a parent to Masakatsu.

Osamu accompanied Masakatsu on a tour around the Waseda University campus before the younger brother took the entrance examination for the prestigious school. But the campus was barricaded so heavily by leftist students that access to its grounds was difficult.

Osamu said Masakatsu at that time may have thought that things were not right.

“That was probably the first experience that aroused and fomented patriotism in my brother,” Osamu said.

Masakatsu entered the university in 1966, and joined the Minzoku-ha (“nationalist”) rightist movement. Minzoku-ha distinguished itself from the pro-U.S., anti-communist policy line of typical postwar right-wingers and set a goal of overthrowing the global order led by World War II victor nations.

Masakatsu began interacting with Mishima when he served on a trial basis for the Self-Defense Forces and on other occasions. It didn’t take long before Masakatsu took the post of “student chief” of Mishima’s group of private soldiers called “Tate no Kai” (Shield society).

Four years after he was admitted to the university, Masakatsu was one of the four men who accompanied Mishima as he broke into the GSDF Eastern Army Headquarters in Tokyo’s Ichigaya district and held the commandant captive.

The hostage-takers scattered fliers with a written appeal saying, among other things, “The SDF will end up as mercenary troops of the United States forever, just as the left are saying, unless (Japan) recovers its autonomy within two years.”

Mishima assembled SDF members beneath a balcony, from which he delivered a speech that lasted about eight minutes.

He called on the SDF to “rise to action” and pushed for upgrading the SDF into a full-scale national military.

When the speech was over, Mishima and Masakatsu committed seppuku.

“I can only think they went mad,” Eisaku Sato, the prime minister at that time, wrote in his diary.

Yasuhiro Nakasone, then director-general of the Defense Agency who would later become prime minister, criticized the action at a news conference.

“It’s a terrible nuisance,” Nakasone said. “What they did is so aberrant.”

In contrast, the majority of Japan’s right-wingers praised it as “an action for justice.”

Mishima left written instructions for Tate no Kai members, saying, “You should propagate Morita’s spirit, if not Mishima’s, for posterity.”

It is generally believed that Masakatsu died to follow his mentor to the grave.

Osamu has consistently argued against that viewpoint.

He said Masakatsu was probably strongly influenced by Mishima, but he wants to believe his brother made his own decision in the last moments of his life.

“Otherwise, I would feel so sorry for him,” he said.

Starting in 1975, Osamu served six terms as a Mie prefectural assemblyman with the backing of the prefectural chapter of the Japan Teachers’ Union.

Unlike his brother, Osamu maintains that Japan should be unarmed and neutral.

“I still want global audiences to learn about the ideals of Article 9 of the Constitution,” he said.

Osamu has visited North Korea on four occasions as a leading promoter of friendly ties with the country, which does not have diplomatic relations with Japan. He was also involved in a campaign to donate a school bus to an ethnic Korean school in Yokkaichi and deepen cultural exchanges.

Osamu said he has read documents about Mishima. He said he felt the writer’s objections to Japan’s flattery of the United States and anxieties about Japan’s status as an independent nation were not preposterous and remain relevant even to this day.

“I do believe Japan is not yet independent in the true sense of the word,” Osamu said.

Japan continues to host U.S. military bases 75 years after World War II. And Tokyo has partially lifted its self-imposed ban on the right to exercise collective self-defense in a break from its pacifist tradition.

Osamu said he is indignant about these and other developments.

“My brother probably had dialogue with Mishima while he was learning about various things,” he said. “I think he thought, ‘This is not the way things should be,’ and took the action out of a desire to make Japan a better country.”

Osamu said the past 50 years feel like they have passed in an instant.

He previously used to walk 15 minutes each way every morning to visit his brother’s grave, where he asked himself about the meaning of Masakatsu’s death. But he does not make the trip anymore because his legs have weakened considerably.

Now, he only joins his hands and says his prayers at his home.

“Could you please offer an incense stick for him?” Osamu said as he ushered an Asahi Shimbun reporter to the front of an altar at his home.

The altar featured memorial photos of Masakatsu and Mishima.