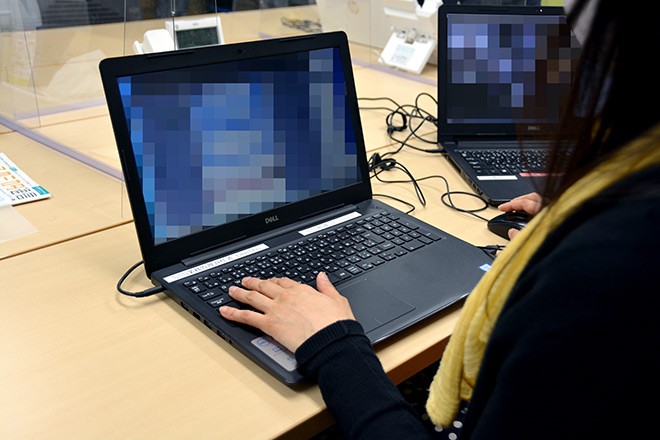 A counselor provides consultation through social media in Tokyo in October under a suicide-prevention program supported by the government. (Asahi Shimbun file photo)

The number of suicides has been increasing in Japan at an alarming pace since July, hinting that the novel coronavirus pandemic is taking a heavy toll on people’s lives and livelihoods.

There has been no shortage of warnings about such a situation.

The central and local governments need to stay on top of the situation and swiftly take any step necessary to prevent things from getting worse.

During the three months through September, the number of suicide victims exceeded 1,800 every month, according to the National Police Agency. While men still accounted for a majority of the cases, an upward trend was seen among women across all age groups.

In August, 651 women took their own lives, up 40 percent from a year earlier.

Japan Suicide Countermeasures Promotion Center, a body designated by the welfare minister to conduct research and surveys about the problem, published an emergency report last month.

The report attributed the rising overall suicide rate to “jobless women” and “women living with other people.”

Women have been vulnerable to the negative effects of the pandemic. Experts had said nonregular workers, such as part-time and temporary workers, which include many women, would lose jobs and that domestic violence would increase due to heightened stress from school closures and teleworking.

It can be said that these predicted problems have grown in seriousness due to the extended health crisis and that the distress and suffering stemming from the problems are manifesting in the worst possible way.

In fact, the number of women in nonregular jobs has been decreasing by an average of about 700,000 from a year earlier since April. The number of requests for expert advice concerning domestic violence has been running about 50 percent higher than levels a year earlier.

There have also been young people who killed themselves, apparently inspired by the suspected suicide of a popular actor.

The number of suicides used to be above 30,000 a year but has fallen to close to 20,000 due to a series of prevention measures taken in recent years. But the situation, if left unaddressed, could roll back the progress, returning to what it used to be.

The top priority should be placed on ensuring stable livelihoods.

The above-mentioned report said the government’s programs to provide emergency funds to help people cope with financial hardships and secure housing may have prevented many possible suicides since spring.

But such financial support for many people will be terminated at the end of the year. The government should consider extending these programs.

It is also urgent to expand counseling services using telephones and social media.

While the number of people who need support is growing, the need to prevent situations where people come into close contact in a confined environment forces cuts in counseling staffs and their working hours.

There are many steps that can be taken to deal with this problem, including improving the environment of offices for such workers to prevent infections and offering training programs for advisers.

The central and local governments should not scrimp on spending to finance these measures.

News media are also responsible to support the cause by following the guidelines for preventing cluster or copycat suicides set by the World Health Organization in reporting on suicide cases.

Efforts to make it easier for distressed people to seek help and systems to reduce their mental and physical burdens are crucial for saving the lives of suicidal people as much as possible.