Chinese Coast Guard to be allowed to fire on foreign vessels 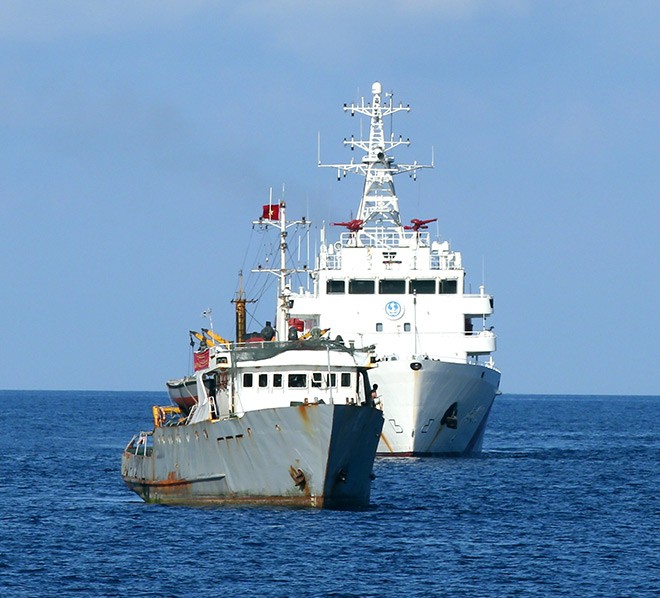 BEIJING--China’s Coast Guard will be empowered to fire on foreign vessels that intrude into territorial waters under sweeping changes announced by the Standing Committee of the National People’s Congress.

The NPC posted draft legislation online Nov. 4 that for the first time establishes a Coast Guard law clearly laying out the duties and powers of the entity charged with protecting China's waters.

The Chinese Coast Guard would have authority to investigate and seize foreign ships and use weapons under certain conditions.

The legislation is designed to establish a formal structure to match the rapidly expanding roles played by the Chinese Coast Guard, which include securing maritime interests espoused by Beijing.

The Chinese Coast Guard is tasked with security and defense activities that allow it to investigate and seize foreign ships venturing into territorial waters claimed by China.

It would also be allowed to “use all necessary measures, including the use of weapons” in the event Chinese territorial claims are threatened.

The legislation states that a major function of the Chinese Coast Guard is to “prevent and remove all actions that threaten state sovereignty” as well as to protect the safety of “important islands and reefs, the exclusive economic zone as well as manmade islands and facilities constructed on the continental shelf.”

Any foreign power found engaged in construction work without Chinese authorization would have that structure removed by the Chinese Coast Guard.

The move seems aimed at giving China the legal grounds for landing on the disputed Senkaku Islands to secure the removal of lighthouses, according to a Japanese government source.

China is locked in a territorial dispute with Japan over the uninhabited Senkakus in the East China Sea and also with Southeast Asian nations in regard to artificial "islands" in the South China Sea.

According to a report by the Japanese Coast Guard, the Chinese Coast Guard is increasing its fleet size, with a focus on larger ships, including those with a full-load displacement of 10,000 tons and equipped with 76-mm automatic cannons.

Deliberations on the legislation began in October in the NPC Standing Committee and could be passed before the year-end at the earliest.