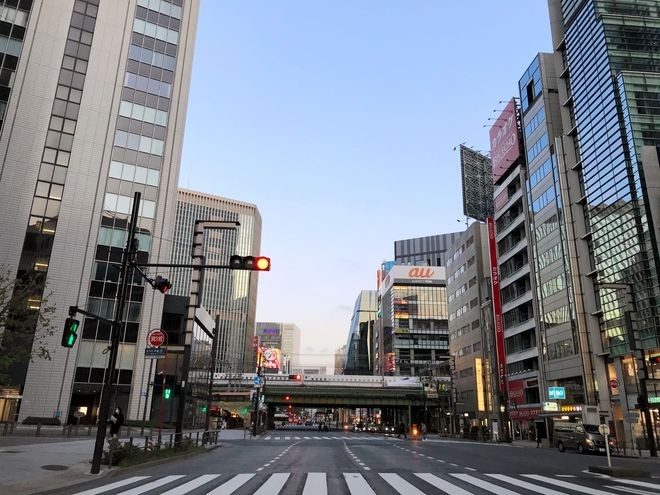 A street in Tokyo’s Yurakucho district is deserted on a holiday as many stores close their doors to prevent the spread of the novel coronavirus one afternoon in April. (Asahi Shimbun file photo)

In a curious development, some regions of Japan have seen a rise in traffic fatalities amid the pandemic, even though traffic volume is down and car accidents in the country dropped by some 20 percent.

Experts have theories as to why that might be, but the numbers are puzzling when looked at together.

There were 220,381 traffic accidents reported across Japan between January and September, dropping by 21.1 percent year on year, according to preliminary data from the National Police Agency. The figure declined in all 47 prefectures.

As people refrained from venturing out, fewer vehicles than usual graced Japan’s streets.

Traffic volume dropped by 10 to 30 percent year on year on major expressways throughout the nation in each week in August, including the Bon festival holidays--a major travel period. The trend appears to be driven by people deciding against taking car trips due to the risks posed by the novel coronavirus.

But at least one expert said the decrease in traffic volume may have sparked an uptick in vehicular deaths.

Fatalities meanwhile rose in Tokyo and 12 other prefectures from last year, including in some rural regions. Tokyo increased by 14.0 percent, Aichi Prefecture rose by 7.5 percent and Kanagawa Prefecture notched up 7.3 percent. It shot up by 100 percent in Ishikawa Prefecture and 30 percent in Nagasaki Prefecture.

“The lighter traffic volume may have led drivers to operate their vehicles at higher speeds,” said Masahiro Ojimi, head of the Tokyo-based traffic accident research center that surveys car accidents at the request of insurance providers and other parties.

The faster a vehicle drives, the higher the shock in the collision, Ojimi noted. The force of impact in a collision would be about seven times greater for a car traveling at 80 kph than one moving at 30 kph.

According to Ojimi, pedestrians could be killed if they get hit by a car going at least 30 to 40 kph, although the results of such a collision could vary depending on their age and body size. Collisions with walls and utility poles can result in motorists’ deaths if they are speeding along at 60 kph or faster.

Data from the National Police Agency shows that driving over the speed limit was detected in 107 instances of all deadly accidents from January through September--up 16 percent from the year before.

But the rise in traffic-related fatalities was not a nationwide phenomenon, with the deaths actually decreasing by as much as 10.4 percent during the January to September period from last year, to 1,988 deaths.

Hokkaido, Toyama, Ehime and Miyazaki prefectures, meanwhile, all remained at the same level as the previous year.

It’s unclear why the trend was so scattered, with another traffic expert suggesting the cause of the increased deaths may have more to do with conditions at home than conditions on the road.

Kazumi Renge, a traffic psychology professor and the president of Tezukayama University in Nara, suggested that anxiety about work and life caused by the pandemic are the likely culprits behind the increase in traffic deaths.

“Stress and concerns can affect people’s level of concentration,” Renge said. “If motorists think of their troubles while driving, that could disturb their concentration on their surroundings.”

Renge said that drivers should take extra caution with the roads during the pandemic.

“One should think about taking advantage of public transportation instead, if possible,” he said. “When you must operate cars for work or your life, you should drive slower and take proper breaks to ensure careful driving.”