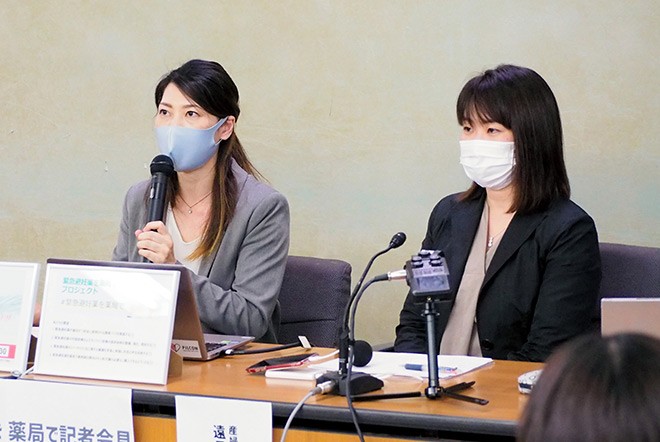 Members of a group calling for over-the-counter access to emergency contraceptive pills hold a news conference at the health ministry in Tokyo on Oct. 27. (Asahi Shimbun file photo)

The government is weighing plans to allow over-the-counter access to emergency contraceptive pills without a doctor’s prescription.

The proposal, which is expected to be part of the government's fifth basic plan to promote gender equality set to start next fiscal year, would help prevent unwanted pregnancies and protect the rights of women.

The measure should be adopted swiftly and used as an opportunity to promote a better public understanding of issues concerning sex and contraception.

Emergency contraceptive pills, if taken within 72 hours of sex, are said to have a high rate of effectiveness by stopping or delaying the release of an egg.

In more than 90 countries, such pills, known as “morning-after” pills, can be purchased without a prescription.

In Japan, emergency contraception has been denied over-the-counter status even though the pills were approved for use in 2011. The rationale was that over-the-counter access, which offers a relatively easy way to prevent pregnancy after a sexual encounter, could lead to growth in “irresponsible sex.”

But obstetricians and gynecologists say emergency contraception is used mainly in common cases where contraception failed--for example, a condom breaking or slipping off, or a woman forgetting to take a low-dose birth control pill.

Women’s rights advocacy groups have long pointed out that the current system can prevent women from quickly obtaining emergency contraceptive pills, which are most effective when taken sooner.

Women who need emergency contraception, for instance, may not have quick access to proper medical institutions or be able to find hospitals and clinics open at night or on holidays.

Emergency contraception is also needed for women who are victims of sexual assault. In such cases, a system is in place for victims to obtain a necessary prescription quickly by consulting with police or a support center.

But victims of sex crimes who are physically and mentally traumatized may not be able to face such encounters in the immediate aftermath of their ordeal.

Women suffer far more damage from unplanned pregnancies than their male partners. In fiscal 2018, figures show that 160,000 women underwent induced abortions. Teenage girls and women in their 20s accounted for half of the cases.

The burden, either physical, mental or economic, would be much lighter if women can use emergency contraception more easily when they are at risk of an unwanted pregnancy than having an abortion.

The World Health Organization says, “All women and girls at risk of an unintended pregnancy have a right to access emergency contraception” and urges governments to integrate this approach into their family planning and public health care policies.

To protect the health of women and respect individual ways of life, Japan should no longer delay giving women easier access to postcoital contraception.

But even if emergency contraceptive bills become available at drugstores as over-the-counter medications, pharmacists should still be involved to ensure that the products will be used correctly under proper guidance.

It should also be noted that using emergency contraception is not a fail-safe way to prevent pregnancy. Women should seek experts’ diagnosis or advice, depending on their circumstances.

It should also be recognized that an emergency contraceptive pill is, as its name indicates, an emergency measure. Such pills are not intended as regular contraception or medications to prevent sexually transmitted diseases.

Everyone should be aware of the importance of regular contraception and learn and practice proper ways of preventing pregnancy.

The policy step of lifting the ban on over-the-counter access to the after-the-fact contraceptive needs to be underpinned by the principle that both men and women should respect each other, being aware of the risks and possible consequences of their acts.