Move to allow libraries to transmit digital versions of books 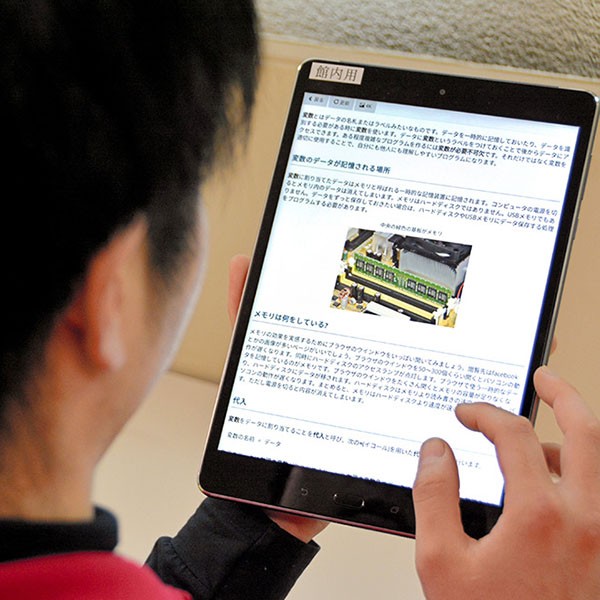 Tablet computers are indispensable for most people in the modern age. (Asahi Shimbun file photo)

The Agency for Cultural Affairs is considering Copyright Law revisions to allow libraries to send digital versions of books directly to readers' computers or smartphones, triggering fears among publishing houses of copyright infringement and a flood of pirated works.

The Council for Cultural Affairs is expected to cobble together a report of its recommendations as early as Nov. 9.

One proposal is to weaken the control copyright holders have over the digital transmission of their work. That would allow libraries to send digital data to users without obtaining authorization from the copyright holder.

Libraries already provide a service of copying up to half of a book and either handing the printed version to a user or mailing it to the individual. The service would be expanded to allow for digital transmission as well as faxing the printed version. The user would also be able to print out the digital version from his or her device.

For out-of-print publications, the National Diet Library would be able to directly send digital versions to users.

Because copyright holders and publishing companies would be hurt financially by giving such easy access to works still on the market, the council proposal also calls for local governments that operate the libraries to pay some form of reimbursement.

But deciding the sort of sums to be paid out will not be easy to settle given the huge potential damage publishing companies and copyright holders face if they cannot secure an amount close to the price of a printed book.

The Agency for Cultural Affairs is planning to compile legislation to revise the Copyright Law for submission to the ordinary Diet session to be convened early next year.

The novel coronavirus pandemic also served as a catalyst for rethinking digital transmission of printed matter.

Many libraries closed for extended periods because of the health scare. The National Diet Library, which has more volumes in its collection than any other library in Japan, closed for about three months from early March. But even now it has placed strict restrictions on users, with a lottery to distribute reservations for visits.

Those moves ruffled the feathers of scholars and graduate students unable to gather materials needed for their research or dissertations.

Even before the COVID-19 crisis, the National Diet Library was making digital versions of part of its collection. But only about 550,000 works with expired copyright have been made accessible online.

And while it has also created digital versions of about 1.5 million out-of-print publications, the digital data can only be sent as far as computer terminals within the National Diet Library due to Copyright Law provisions.

While the novel coronavirus pandemic has convinced some in the publishing industry that digital transmission is the way of the future, major concerns exist about the negative economic impact this could have.

According to the Research Institute for Publications, sales of e-books in the first half of this year increased by 30 percent to 176.2 billion yen ($1.7 billion).

An executive of a leading publishing company summed up industry concerns by saying: “At a time when we have focused more emphasis on digital books, allowing libraries to transmit digital data would apply tremendous pressure on the private sector. There would also be greater fears of a spread of pirated versions.”

The executive outlined another potential problem by noting that “if a husband asked for the first half of a book to be sent to his smartphone while the wife asked for the second half, the couple would get their hands on the entire book.”

However, the president of another publishing company was more sanguine in light of a growing decline in readers of printed matter, saying anything that stirs interest in a book, even digital transmission, could prove to be a savior for the industry.

“If we allowed for a partial sample to be read, readers who found it interesting would likely purchase the entire work,” the president said.

Yoshio Yanagi, a specially appointed professor of library management at the University of Tokyo who was involved in putting together a digital library concept while still working at the National Diet Library, said the creation of a digital library is an unstoppable aspect of technological progress.

“But there will be a need to give greater consideration to rights holders by setting the reimbursement amount at a high level given the huge effect on writers and publishing companies through transmitting digital data of works still on the market,” he said.

(This article was written by Hikari Maruyama, Yasukazu Akada and Bunna Takizawa.)