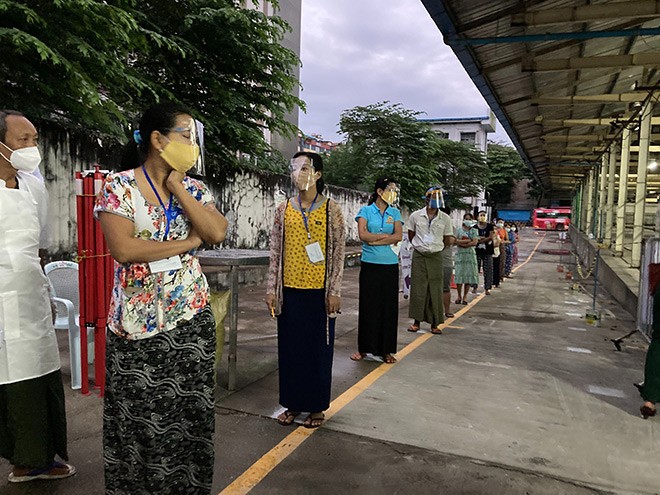 YANGON, Myanmar (AP) — Voting was underway in Myanmar’s elections on Sunday, with the party of Nobel Peace Prize laureate Aung San Suu Kyi heavily favored to retain power it had wrestled from the powerful military five years ago.

More than 90 parties are competing for seats in the lower and upper houses of Parliament, while there are also elections at the state and regional levels.

With the opposition in disarray, Suu Kyi remains Myanmar’s most popular politician. But her government has fallen short of expectations, with economic growth doing little to alleviate widespread poverty and a failure to ease tensions among the country’s fractious ethnic groups.

There are more than 37 million people eligible to vote, including 5 million first-timers. Fear of the coronavirus and safety measures put in place to contain it may hurt voter turnout. Traditional campaigning was severely limited by social distancing and quarantines in some areas.

Suu Kyi’s party, the National League for Democracy, won the last elections in 2015 in a landslide, ending more than five decades of military-directed rule in the country.

Her party’s main challenger, as it was five years ago, is the military-backed Union Solidarity and Development Party, which has led the opposition in Parliament.

The ability of Suu Kyi's administration to run the country has been hamstrung by a clause in the 2008 army-drafted constitution giving the military 25% of the seats in Parliament, allowing it to block constitutional reforms.

The Election Commission said it would begin to announce results Monday morning. But it may take up to a week to collect all the votes, some of which will come from remote jungle areas.

With little sign of major interest in policy debates, the vote is seen as a referendum on Suu Kyi’s leadership.

“There is no major party really putting an alternative, a credible alternative, forward,” Yangon-based political analyst Richard Horsey said, explaining part of the reason Suu Kyi's side has a winning hand in Myanmar’s heartland, where its ethnic Burman majority lives.

Even more important for the ruling party’s prospects, he said, is “the personal support, even love, that many people have for Aung San Suu Kyi herself, almost irrespective of how the government administration performs, how the economy performs and so on."

The love does not extend to the borderlands, the states occupied by the myriad ethnic minorities who have been seeking greater political autonomy for decades.

Suu Kyi’s ambitious plans to reconcile with the minorities have foundered. Their grievances have frequently erupted into armed rebellion, posing major threats to national security.

The ethnic political parties in 2015 had cooperated with Suu Kyi’s party on a constituency by constituency basis to ensure victory against candidates from the Union Solidarity and Development Party.

But this year, the ethnic parties, disappointed with her failure to reach a deal to expand their political rights, will be supporting only their own candidates.

The Election Commission caused major controversy when it canceled voting in some areas where parties critical of the government were certain to win seats. The commission blamed armed insurgency, but critics said the agency was carrying out the NLD’s bidding. More than 1 million people are estimated to have been disenfranchised.

The plight of Myanmar's Muslim Rohingya ethnic minority — an issue of concern to foreign friends of the country — played no real role in the campaign. A brutal 2017 counterinsurgency campaign by Myanmar’s army drove about 740,000 Rohingya to flee across the border to Bangladesh, leading to a World Court investigation of possible genocide.

Long-standing prejudice against the Rohingya, whom many consider illegal immigrants from South Asia despite their families having been settled in Myanmar for generations, has deprived most of Myanmar citizenship and basic rights, including voting.

U.N. Secretary-General Antonio Guterres on Friday expressed concern at the “legal limbo” of the Rohingya in the western state of Rakhine and their inability to vote, U.N. spokesperson Stephane Dujarric said.

“It is important that everyone have a voice and be able to participate in these elections in a very ... inclusive way,” Dujarric said.