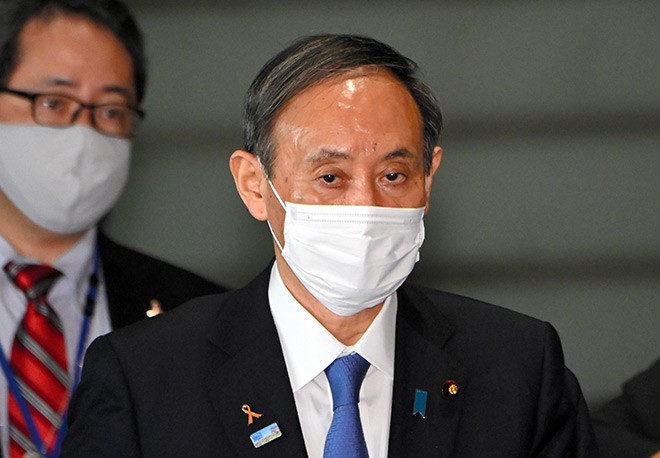 Prime Minister Yoshihide Suga tweeted his congratulations to Democratic nominee Joe Biden on his victory in the U.S. presidential election and hopes for bolstering bilateral relations between their respective nations.

In the tweet around 6:30 a.m. on Nov. 8, Suga followed other world leaders in congratulating Biden and his running mate, Senator Kamala Harris, for prevailing in the tightly contested race that took days to call after the polls closed.

“I look forward to working together to further strengthen the Japan-U.S. alliance and to secure peace, freedom and prosperity of the world as well as the Indo-Pacific region,” Suga said.

Suga’s tweet came after German Chancellor Angela Merkel, French President Emmanuel Macron and other world leaders congratulated Biden for winning the election as soon as the U.S. media called the race. Japanese officials acted cautiously on issuing such a statement, which came about five hours after the outcome was confirmed in the United States.

Suga hopes to visit the United States to meet with the new president after he is sworn in on Jan. 20, according to government sources.

But it could be delayed as Biden is reportedly vigilant about an in-person meeting as a precaution against the novel coronavirus, which has claimed more than 230,000 lives in the United States, by far the highest count in the world.

During the campaign, Biden vowed to restore the U.S. policy of prioritizing relations with its allies in diplomacy and the security arena, denouncing President Donald Trump for damaging ties by downplaying their contributions.

A key issue Tokyo needs to hammer out with Washington is a special accord concerning its host nation support for the U.S. military stationed in Japan.

The current pact, which covers a five-year-period, expires in March. The Japanese government is expected to start full-fledged negotiations with the U.S. side shortly. Preliminary talks on the issue, a contentious one under the Trump administration, were held in October.

Trump had pressed Japan to shoulder more of the financial burden for the deployment of the U.S. military in its territories by threatening to withdraw troops.

Although Biden stressed the importance of the security relationship with U.S. allies, it will not likely result in any meaningful change in U.S. calls on allies to play a larger role in their defense. That has been the U.S. stance since the Obama administration.

A senior Japanese government official said Tokyo wants to gain understanding from Washington by discussing not only specific issues on the planned accord but also how it can expand its commitment for strengthened ties between the two allies.

How Biden will deal with China will also be a point of interest. No significant change is expected in the U.S. hard-line policy toward China even under a Biden presidency as the U.S. leader does not want to look weak in his dealings with the emerging superpower.

The Japanese government will be forced to tread a thin line in diplomacy as animosity between the two superpowers is less likely to ease anytime soon.

As for trade, government officials are closely watching if the United States will rejoin the Trans-Pacific Partnership free trade agreement, which it pulled out of after Trump took office.

Biden said in a debate in July last year that Washington will not return to the pact under the initial deal that was struck.

But a high-ranking official with the Japanese Foreign Ministry took it as indication that Biden has not ruled out the possibility of the United States rejoining the agreement.

On the environmental front, Biden has pledged to rejoin the Paris Agreement, in which nations aim at achieving net zero emission of greenhouse gases by late this century.

Environment Minister Shinjiro Koizumi said the United States' return to the agreement will be a huge plus for the global effort to fight climate change.

“The effectiveness of an initiative cannot be fully ensured without the United States aboard when nations grapple with a global challenge,” he said on Nov. 7.