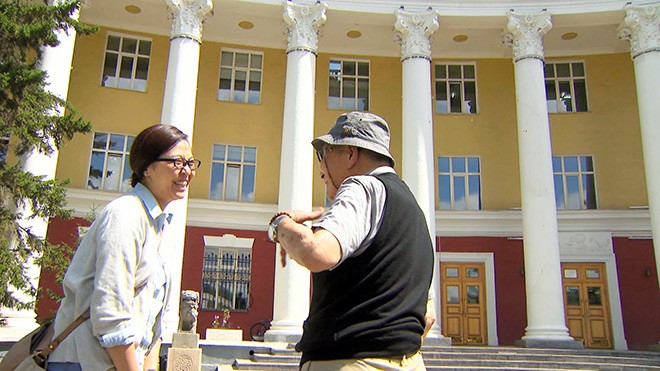 Oyunchimeg Khongorzul, left, who goes by the name Zora, speaks to Masao Tomohiro outside the National University of Mongolia. (Provided by Chukyo TV Broadcasting Co.)

NAGOYA--Oyunchimeg Khongorzul racked her brain when she read a newspaper article online that the National University of Mongolia, her alma mater, had been built on the backs of Japanese detainees.

Khongorzul, who commonly goes by the name Zora, didn’t recall having heard about the internment of Japanese in Mongolia after World War II when she studied international relations at her university.

Nor did she remember having learned about the topic during history classes.

Zora, 39, a reporter for Chukyo TV Broadcasting Co., has directed a documentary on the subject, which won the runner-up prize for a TV program in the Japan Commercial Broadcasters Association’s JBA Awards in November.

“Bayartai: A farewell 72 years after internment in Mongolia” is based on the research and interviews she conducted over eight years.

Her research started in 2011 when she was in the first year of her career at the Nagoya-based broadcaster. Zora, who studied at a university in Tokyo, joined the company following a stint as a part-timer.

Zora learned there were about 12,000 Japanese internees in Mongolia, of whom 1,600 or so lost their lives under forced labor.

Behind the prize-winning TV program is a wealth of personal histories, both her own and a former Japanese internee in Mongolia.

Starting in 2013, Zora began attending annual meetings of the Mongol Kai (Mongolia society), which organizes former Japanese internees in Mongolia. She got acquainted with Masao Tomohiro, a 95-year-old resident of Kobe, in the process.

Tomohiro was in Manchukuo, in today’s northeastern China, when World War II ended. He was taken by Soviet troops to Ulan Bator, the capital of Mongolia.

Tomohiro had both his legs amputated during the internment in Mongolia, where he suffered frostbite in the intense cold. He now wears prosthetic legs.

After he was repatriated, he returned to Mongolia on more than 40 occasions despite his physical disability. He visited the graves of his comrades-in-arms left in Mongolia, collected their remains and supported an orphanage founded by a former army surgeon.

Tomohiro contacted Zora in spring 2019 to tell her that he was going on his “last” trip to console the spirits of the dead. He had not been back to Mongolia since 2011, partly because of his advanced age.

Zora accompanied him on that consolatory trip in June last year.

Tomohiro visited the former site of a hospital where he had his legs amputated. He was also reunited with a woman who had grown up in the orphanage.

He visited a memorial dedicated to his dead comrades in Mongolia to bid his final farewell.

“Bayartai,” the Mongolian for goodbye, literary means, “(Go) with joy,” and has the connotation of hopes for a happy reunion.

“Tomohiro once left Mongolia as an internee, but he returned to the country on many occasions to see his (dead) comrades-in-arms, and he has also maintained ties with Mongolians by supporting the orphanage,” Zora said in explaining why she chose “Bayartai” as the program’s title.

After the program was aired in December last year, Zora revisited Mongolia to incorporate viewpoints from the Mongolian side.

She appeared on Mongolian TV and called on people to provide information. She got an opportunity to interview, a 96-year-old former Mongolian soldier who was a prison guard for Japanese internees.

Zora recomposed her program by including the results of her research trip and had it aired under the same title in May, which won the JBA runner-up prize.

“I am happy about the award, which will provide an opportunity for people to learn about the internment of Japanese in Mongolia,” she said.

There was a scene that was not included in the TV program but nevertheless meant a lot to Zora.

That is when she said “thank you” to Tomohiro outside the National University of Mongolia while she was accompanying him on his last consolatory trip.

“I wanted to convey my gratitude to him on behalf of my compatriots after I learned about the hardships of those who perished through my research and interviews,” Zora said.

“I want this program to be aired on a Mongolian TV station,” she added. “I want an inscription to be engraved one day on a pillar at my alma mater to say, ‘This university was built by Japanese.’ I want everybody to know that as a fact.”