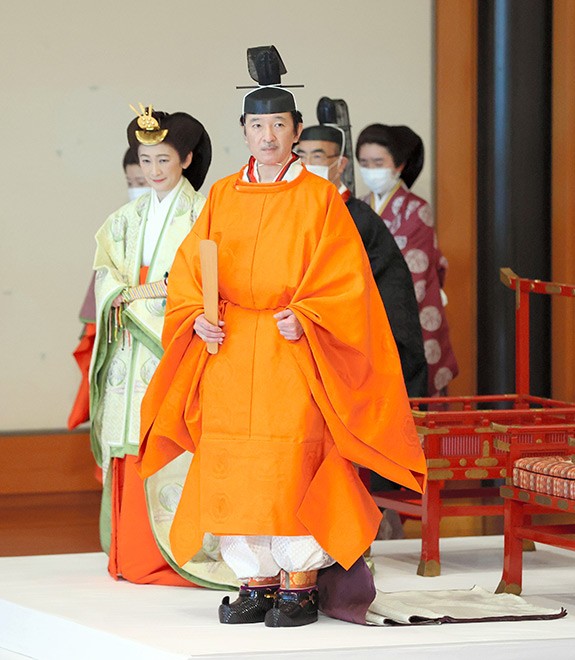 Crown Prince Fumihito and Crown Princess Kiko attend the ceremony for the proclamation of the crown prince in the Matsu-no-Ma state room at the Imperial Palace at 11 a.m. on Nov. 8. (Pool)

Crown Prince Fumihito on Nov. 8 was proclaimed as first in line to the Chrysanthemum Throne in a series of ceremonies delayed seven months due to the novel coronavirus pandemic.

About 50 guests attended the ceremonies at the Imperial Palace in Tokyo, including members of the imperial family, Prime Minister Yoshihide Suga and heads of other government branches.

Dressed in traditional formal court dress reserved for the emperor, Emperor Naruhito performed the Rikkoshi-Senmei-no-Gi, or ceremony for proclamation of crown prince, for his brother.

Naruhito declared, “I proclaim to those at home and abroad that Fumihito is crown prince.”

Fumihito, 54, also wearing court dress, expressed his resolve to fulfill his duties as crown prince while giving deep thought to his responsibility.

About 350 guests from Japan and abroad were initially expected to be invited to the ceremonial events, originally set for April.

But the number of invitees was scaled back to about 50 as a precaution against the virus. A banquet to mark the occasion was similarly canceled.

Officials ensured that the Matsu-no-Ma state room, the venue for the proclamation ceremony, was well ventilated by opening the paper screens and doors.