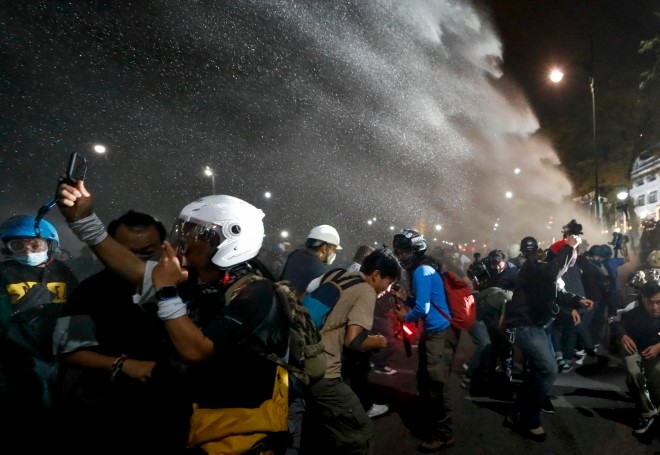 Police use water cannons to disperse pro-democracy protesters during a street march in Bangkok on Nov. 8. (AP Photo)

BANGKOK--Despite a burst of water cannon and a police blockade, thousands of Thai protesters marched to the Grand Palace in Bangkok on Sunday to demand curbs to King Maha Vajiralongkorn’s powers and the removal of the government.

Police used the water cannon for only the second time in months of largely peaceful protests to demand greater democracy and the departure of Prime Minister Prayuth Chan-ocha, a former junta leader.

“When the king truly cherishes democracy, all people will find happiness,” the protesters said in a statement read a few dozen metres for the walls of the palace, where they were stopped by police lines.

“When you hear all the flattering praise from the people, you must also hear fearless criticisms and suggestions all the same,” said the statement, signed “with power of equal human dignity” by “people.”

The Royal Palace was not available for comment. It has not commented since the start of the protests.

But the king said a week ago that the protesters were still loved and that Thailand was a land of compromise, as he greeted thousands of well-wishers near the very spot that the demonstrators reached on Sunday.

“Reform or revolution,” read one placard.

Police spokesman Kissana Phathanacharoen said water cannon had been fired only as a warning. The Bangkok authority’s emergency unit said one police officer and four protesters were hurt during the brief confrontation outside the palace, where police had set a barricade of buses and barbed wire.

“We no longer want the monarch to interfere in politics,” Jutatip Sirikhan, one of the protest leaders, told Reuters.

One 25-year-old protester, who gave his name only as Keng, said “Please, king, please listen to the people. People are unhappy because you let the military have full power and approved their coups. We want the reform.”

The protesters brought boxes stuffed with letters for the king and left them near the palace with police agreement.

Protests since July have increasingly called for reforms to the powerful monarchy, breaking a long-standing taboo against criticizing the institution--which can be punished by up to 15 years in prison.

The protesters say the monarchy has helped enable decades of military domination of Thailand, most recently by approving the premiership of Prayuth, who seized power in a 2014 coup and kept it after disputed elections last year.

The protesters seek to put the king more clearly under the constitution, reversing changes he made shortly after taking the throne as well as moves he made to take personal control of the palace fortune and some army units.

Several dozen royalists earlier held a counter-protest at Democracy Monument, wearing yellow shirts in the color of the king and waving Thai flags. Many held up pictures of the king and his late father, King Bhumibol Adulyadej.

“I want to protect the monarchy and the king,” said Chutima Liamthong, 58. “The monarchy is the identity of Thailand. We cannot stand without the monarchy,” she said.

Monarchists see the student-led protesters’ demands for reforms to the institution as a way of getting rid it of entirely, although protesters deny that is their goal.